The arrival over the last 20 years of fast, cheap fashion at one end of the market and affordable luxury at the other has left M&S struggling to recapture its universal appeal 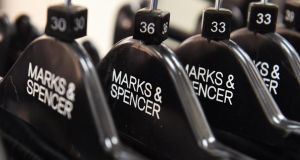 After 14 consecutive quarterly declines in clothing, footwear and homeware sales, time could be running out for the man tasked with finding a solution - Dutchman Marc Bolland. (Photograph: EPA/ANDY RAIN)

For generations, British children went to school in Marks & Spencer’s (MKS.L) clothes, teenagers turned to it for first interview suits and shoppers of all ages bought its underwear.

But the arrival over the last 20 years of fast, cheap fashion at one end of the market and affordable luxury at the other has left M&S struggling to recapture its universal appeal.

After 14 consecutive quarterly declines in clothing, footwear and homeware sales, time could be running out for the man tasked with finding a solution - Dutchman Marc Bolland.

A rising share price, a strong dividend and signs of improvement in its clothes had largely kept investors onside during his five-year tenure, but a disastrous Christmas has reignited the question of whether M&S needs a fresh direction.

A change of faces at the top of several of Britain’s biggest retailers in recent months could also add to the momentum.

A top-30 investor said he was sticking with M&S for now.

“There have been clear signs of improvement in recent years, not least in merchandise, and the Christmas problems should prove to be a one off,” he said on condition of anonymity.

Investors broadly support Bolland’s strategy. M&S has a reputation for quality and innovation in food no longer replicated in clothing, something Bolland has tried to address.

In 2012, he brought in Belinda Earl, previously at upmarket store Jaeger, to resuscitate womenswear. Her recent collections have wowed the fashion press. This season, Vogue has singled out a seventies-style suede skirt and a pink trench coat.

Quality has also improved through the use of more natural fibers and he moved to make M&S more competitive against rivals like Zara, part of Spain’s Inditex, where new ranges hit the shelves every week. He is overhauling the supply chain to respond quicker to fashion trends and improve margins.

Over Christmas womenswear was the best performing category, and the signs are good for the spring. “These pieces are more edgy and more trend-led than anything we’ve seen from middle England’s erstwhile favorite to date – and we’re more than a little impressed,” said the Metro newspaper.

The website has been revamped, with customer reviews, links to social media and content tailored for mobile devices although it has had teething problems.

The strategy has yet to deliver higher sales, although margins are improving, giving investors hope for higher payouts after hints it could increase the dividend in May.

“There is an element of investors being paid to wait in as much as the dividend yield is 3.8 per cent, which is fairly punchy,” said Hargreaves Lansdown Stockbroker’s head of equities Richard Hunter, of a yield that compares to a sector return of 3.4 per cent on a forward year basis.

Founded in 1884 on a market stall in northern England, M&S flourished in the second half of the twentieth century.

In the 1960s came innovations such as ladder-resistant stockings, while machine washable wool jumpers took off in the 1970s and chilled ready meals were all the rage in the 1980s.

When asked where she bought her underwear, Margaret Thatcher, prime minister from 1979 to 1990, replied, “Why, Marks & Spencer of course. Doesn’t everyone?”

In 1997 it became the first British retailer to post profits of 1 billion pounds but a couple of years later sales and profits fell and its market cap halved. Subsequent turnarounds have proved short lived.

But in a sign of the challenge faced by M&S, attempts by the fashion team to win over shoppers at one end of the spectrum can sometimes alienate others. “Shapeless, unattractive ‘dresses’ that I don’t think my Granny would have worn when she was alive,” Shirley Em, aged 66, said on M&S’s Facebook page this month.

Progress made online was undone by problems in fulfilling orders from a distribution center, opened with fanfare in 2013.

Online, which accounts for around 15 per cent of non-food revenue against the more than 37 per cent of online and catalogs sales Next makes, were down 5.9 per cent in the 13 weeks to Dec. 27.

“It was not working over a period when online is critical,” Neil Saunders at retail researcher Conlumino said.

Shares in M&S, which hit a high of 759 pence in 2007 before falling sharply, have risen 26 percent under Bolland’s tenure, outperforming a 17 percent rise in the FTSE 100 index .FTSE. Next, however, is up more than 200 per cent in the same period.

Internally, ditching Bolland is not a subject of conversation, say insiders.

But shareholder patience won’t last forever. An update on April 2 could prove decisive.