Alastair Blair started with Accenture as a graduate, and is now head of its Irish division 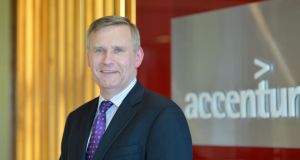 Accenture Ireland Managing Director Alistair Blair: “We look for certain characteristics. We want people with exploratory and inquisitive minds, who are ambitious and who can put the client first.” Photograph: Alan Betson

When Alastair Blair joined Accenture Ireland’s graduate programme in 1987, the company has just 70 employees. Fast forward almost 30 years, and he is now the head of the company’s Irish arm, which employs more than 1,800 people.

Blair was one of seven people in the graduate programme intake, and the only still remaining at the company 29 years later.

“The decisions you make as a teenager or in your early 20s are often more clear in your mind than the decisions you made last week. I opted to study engineering as my brother was studying it, and I was interested by what he did on the course. I then applied to Accenture after.”

Blair spent his first six weeks at Accenture learning how to programme, before “being packed off to Germany” in early 1988. There he worked with major financial services organisations on a broad range of strategy, communications, and business transformation programmes, before going on to do the same thing in Luxembourg and Sweden.

Perhaps the biggest learning curve came in 1993, when he was sent to work for Accenture in Saudi Arabia.

“We worked 5½ days a week in Saudi. That was the working week there. I got to meet and socialise with people from South Sudan and Ethiopia. I quickly realised that we have a lot of similarities. People find ways to get on and communicate even if they don’t speak the language.”

Blair worked in retail banking for Accenture in Saudi Arabia. The Saudi bank branches were very focused on deposits, as borrowing under Sharia law was restricted.

“There was a very big savings culture there. Most bank transactions were a payment of a deposit. We tried to get the banks to think more about lending and interacting with customers.”

“We had 20 different nationalities and 13 languages in a team of 100. I had to use very simple language always as not everyone had good English. It was a huge learning curve.”

He spent two years there before returning to Ireland in the summer of 1995, which was one of the hottest summers on record.

“I remember it distinctly. It was 45 degrees in Saudi. I arrived back in Ireland and it was 28-30 degrees.”

He was only home for four weeks before being sent to the UK.

“I didn’t mind all the travel as I had done very little in college when I was younger, before I’d started working.”

From 2005 to 2010, he was head of Accenture’s financial services business in Ireland. He was then asked to take over the company’s banking business in the UK, one week after Ireland’s bailout.

“I have a vivid memory of staying in a hotel for a few weeks before getting a flat. The first week I walked out of the Tube station by the Bank of England and there, stuck up on the railings, was the City AM newspaper with a picture of the tricolour and a story about the bailout.”

While Blair had moved to London for the job, his family stayed back home in Ireland, which he says was hard.

“I really wanted to do the job in the UK. It was one of the most extraordinary times in financial services. My family were in Ireland and I’d come home every weekend. I’d be lying if I said it wasn’t hard flying back to the UK every week, with them here.”

Blair says Accenture will recruit 450 new employees before the end of August. The company is investing €25 million in a new global centre for innovation in Dublin, where 200 of these jobs will be based. The company will take on a further 250 staff including data scientists, developers, data architects and banking industry experts.

“We look for certain characteristics. We want people with exploratory and inquisitive minds, who are ambitious and who can put the client first.”

In 2015, Accenture reported global revenues of $31 billion. Ireland reports as part of the Europe region, which had revenues of $10.93 billion for fiscal year 2015.

What does he think of the rates charged by Accenture for its services? The company received €7 million in consultancy fees from Irish Water between January 2014 and February 2015. It was paid €2.09 million by the Department of Social Protection in 2013 for a variety of contracts.

“I don’t think clients engage you unless they get what they want. We’ve worked with some clients for 25 years. They’re pretty direct with us if we’re not doing things right,” Blair says of the company’s clients which include AIB, the Revenue Commissioners, the Department of Social Protection, Electric Ireland, Kerry Group, Microsoft, Ryanair and Pfizer.

He says the company is currently very interested in the connected world, be it connected homes, cars, health etc.

With an eye on the connected world, Accenture has collaborated with Electric Ireland to develop and deliver a pilot programme that will introduce new Connected Home solutions.

As part of the pilot, 600 people will trial the solutions, receiving a number of smart plugs and a monitor to measure electricity consumption installed in their homes.

“They will be able to control and track their electricity remotely from their smartphones. They can track usage socket by socket. They could also control their immersion and switch it off.”

For the collaboration, Accenture built the engine that captures all the data.

“Our joint Internet of Things project highlights the critical role of digital technology in improving our energy efficiency, and offers Irish consumers the future of managing and controlling their own energy consumption.”

He says technology and analytics are becoming big parts of Accenture’s business, working with businesses to solve problems, reduce risk and prevent fraud.

“We can solve a very broad range of problems from strategy to digital to outsourcing and technology . . . Everything has to be delivered at speed.

“In the case of the Department of Social protection, no one wants tax money being paid out erroneously or people committing fraud. We put tools in place that analyse all the data and payments, look for patterns and identify fraud or errors.”

Things don’t always run smoothly though, and there have been tough times he says, especially during the recession.

“We dealt with situations with clients where they can’t get the product out or their supply chain is broken and its panic stations. We have to remain calm though to advise them.

“We had one situation where a client couldn’t serve customers. We were able to fix it but took a long time. We tell them that bad news never gets any better, so to tell of a problem soon.”

Accenture staff work side by side and/or against employees from rival consultancy firms on certain projects, but Blair is not fazed. “Companies such as Deloitte and PwC are not an issue for us. We’ll compete with them and give them a run for their money.”

He says there is a pretty good balance of male and female employees in Accenture Ireland, with almost half (45 per cent) of the Irish workforce female.

“Forty per cent of management are women. All evidence shows a balanced workforce is more sustainable over time.” CV Name: Alastair Blair Position: country managing director, Accenture Ireland Age: 49 (50 on February 3rd) Family: Married to Leslie, three children. Lives: Glenageary, Co Dublin. Education: Degree in electronic engineering from TCD. Something about him that would surprise: I drive a retro Beetle which is a source of amusement to some of my team. I’m also fixing up a 1985 MG. Something about him that we would expect: I’m desperately trying to be half decent at sports again. I’m a former failed golfer but want to get back into it.