Ashley puts cat among the pigeons with House of Fraser move 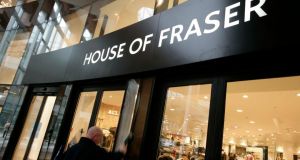 What is Mike Ashley up to? First, in a move that caught the City on the hop, he gate-crashed the Chinese takeover of House of Fraser, snapping up an 11 per cent stake in the UK department stores chain. Then, in an equally unexpected manoeuvre, he sent shares in his own company plunging as he offloaded a chunky £200 million stake.

By close of play last night, the Ashley share sale had wiped £300 million from the value of his Sports Direct group, as the shares tanked by almost 10 per cent. The sale took Ashley’s stake in the business he founded more than 30 years ago down from 62 per cent to 58 per cent.

Famously publicity-averse the billionaire businessman, who also owns Newcastle United football club, has certainly generated a lot of headlines in recent days. But he has done little to enhance his uneasy relationship with the City.

Although he is respected for his retailing expertise – and for a stellar share price performance that has propelled Sports Direct into the FTSE 100 – Ashley doesn’t have much time for the City. And the City is extremely wary of him, not least because of his track record of making unexpected corporate moves without bothering to explain himself.

It’s far from clear, for example, what his plans are for the 11 per cent stake he now owns in House of Fraser. He bought the shares last week, after the 165 year old department stores chain agreed a £450 million takeover from the Chinese conglomerate Sanpower. Either Ashley wants to block the deal and launch a bid of his own, or hold out for a higher price. Or perhaps he just wants to sit on the shares and cause trouble.

Equally, it’s unclear exactly what was behind Ashley’s decision to cut his stake in Sports Direct. There was some speculation in the Square Mile that, knowing the move would hit the share price, he may have sold as an act of revenge against his company’s institutional shareholders. They recently blocked Sports Direct’s plans to reward Ashley (who does not take a salary from the company) with bonus shares worth more than £70 million.

The scheme was abandoned after it became clear that investors would not support it – the second time in the past couple of years that Ashley’s bonus plans have been scuppered.

Ashley has now indicated he will not sell any further shares in Sports Direct for at least five months, but the City is wary of that promise. The boss of Britain’s biggest sports retailer has form for saying one thing and doing another – last year, he dumped over £100 million of stock just eight months after pledging he would not sell any shares for a year.


Co-operative Bank
They say that bad figures always take longer to add up and the truth of that should be amply demonstrated this Friday when the troubled Co-operative Bank, which has almost five million customers, reports its results.

At least we think it will report its results on Friday. The publication of what we already know will be dire figures has been postponed twice and the latest delay is heightening fears that even worse news could be on the way.

Losses at the bank, which had to be rescued after the emergence last year of a £1.5 billion black hole in its accounts, are expected to be in the region of £1.3 billion. Last month it was forced to ask investors to stump up a further £400 million because of additional costs of compensating customers mis-sold products such as payment protection insurance.

Formerly a wholly-owned part of the Co-operative Group, whose interests range from farms and pharmacies to supermarkets and funeral homes, control of the bank is now in the hands of a group of hedge funds, which provided the cash for the rescue. The mutual organisation, which itself remains in a state of turmoil, has seen its stake diluted to 30 per cent. The delay in the figures has raised fears that the hedge funds may be reluctant to pump in further cash to the bank.

Lord Myers, the former City minister brought in to restore the Co-op’s reputation after the Reverend Paul Flowers scandal, is struggling to push through reforms at the group in the face of opposition from members of its regional boards.

Like the bank, the Co-op group’s results have also been delayed. This follows the abrupt departure of new chief executive Euan Sutherland, who quit after details of his £3.6 million pay package were leaked to the press. As he quit, Sutherland branded the mutual organisation “ungovernable”.

1 Bank leaked my loan request to family who tried to rip me off
2 Boris Johnson's new immigration regime will damage much more than industry
3 Mastercard to create 1,200 new jobs by expanding base in Dublin
4 Nineteen staff made redundant by Nama share €1m
5 Appeals board grants planning for 354 Greystones homes
6 Varadkar resigns amid warning impasse will hit the economy
7 Billionaire Zara founder and German funds vie for prime Dublin offices
8 Knock gets visit from world’s largest passenger plane
9 Barclays scraps system monitoring how long staff spent at desks
10 How can I view my dead brother’s will if I’m not the executor?
Real news has value SUBSCRIBE