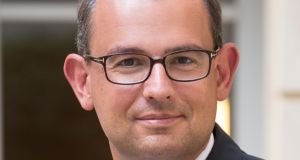 Mr Pflanz (49) joins the company from Maxingvest Group, the parent company of a German coffee business and a German skin and personal care business.

Prior to joining the Maxingvest Group, Mr Pflanz held a variety of roles in the French liqueur company Remy-Cointreau Group, including chief financial officer and chief operations officer.

Between 1992 and 2010 Mr Pflanz worked with L’Oréal Group, most recently as the chief financial officer of the company’s global consumer products division.

“Frederic’s proven career in the global consumer products sector, combined with his extensive finance experience, will add significant expertise and capability to our management team. His appointment marks another important milestone for the group as we build the senior executive team to stabilise the business and, in time, to deliver increased performance and growth,” said Aryzta chairman Gary McGann.

“We would also like to acknowledge the major contribution David Wilkinson, interim CFO, has made over the past number of months. David will remain with the group until early 2018 to ensure an orderly transition process,” he added.

In a client note, analysts at Davy stockbrokers said: “The appointment of Pflanz, who has significant consumer products experience, is an important step for the group as it seeks to rebuild its senior executive team and embark on the next phase of its development.”