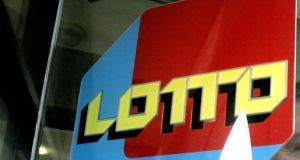 An Post, which has operated the lottery business since it was established in 1987, is understood to have forged a strategic alliance with Ontario Teachers’ Pension Plan (OTPP), the Canadian investment vehicle which owns Camelot.

An Post is to mount a joint bid for the Irish lottery with the owner of UK operator Camelot, according to well-placed sources.

The semi-State, which has operated the business since it was established in 1987, is understood to have forged a strategic alliance with Ontario Teachers’ Pension Plan (OTPP), the Canadian investment vehicle which owns Camelot.

The move will come as a surprise to most observers who had expected An Post to align itself with Italian-owned gaming giant Gtech, its current technology partner.

Goodbody Corporate Finance has been advising An Post on its bid since Minister for Public Enterprise Brendan Howlin announced the next licence would be issued on a 20-year basis in return for an upfront payment.

If successful in its joint bid, the Canadian pension fund, which boasts net assets of CAN$129.5 billion (€96 billion), is likely to finance the upfront payment, which will be paid in two equal instalments, this year and next.

Camelot, which was acquired by OTPP in 2010 for £389 million (€455 million), has been eyeing the Irish business for several years, and considered bidding the last time the licence came up for tender. The UK company is also known to favour the idea of having an established, local brand like An Post on the ground.

A spokeswoman for Camelot said: “As I’m sure you can appreciate it would be inappropriate for us to comment on any transactions we may or may not be considering.”

In a recent interview with The Irish Times, however, Camelot managing director Alex Kovach praised the Government’s decision to auction off the licence in this fashion.

He said the best way of achieving “alignment between the operator, the government and the good causes” was through an upfront payment as it ensured the operator was incentivised to grow the business and thereby maximise revenues for good causes.

Under the current licensing arrangements An Post receives an annual management fee of just under €3 million to operate the business. However, under the terms of the new licence the next operator is likely to receive a significantly enhanced operator’s fee, thought to be about €40-€50 million a year, equating to about 6 per cent of turnover.

Mr Howlin formally launched the competition process for the next licence on Thursday, inviting prospective bidders to lodge their “expressions of interest” by the June 7th deadline.