RBS to remain in public hands for next five years, Cable indicates

Seen & Heard: British business minister reported as saying he believes there is little prospect of sale before next UK general election 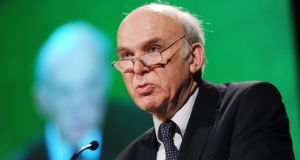 British business secretary Vince Cable said he thought it probable the exchequer would retain its 81 per cent shareholding in RBS for the majority of the next parliament. Photograph: Stefan Rousseau/PA Wire

British business minister Vince Cable has indicated that Ulster Bank parent RBS will be in public hands for another five years, according to the Sunday Telegraph, which says this increases the chances of the group being broken up before it is reprivatised.

The paper, citing an interview with the Liberal Democrat minister, reports that he believed there was little prospect of any sale taking place before the next UK general election.

Going further, Cable said he thought it probable that the exchequer would retain its 81 per cent shareholding in the business for the majority of the next parliament.

Those comments, the paper notes, stand in stark contrast to those of British prime minister David Cameron, who said last May that the stake should be sold as soon as possible.

Cable says the Rothschild review of a good bank/bad bank option could see assets such as Ulster Bank and RBS’s £63 billion (€73 billion)commercial property book separated from the bank and recapitalised separately.

Citing a report conducted last year by Scott Dobbie, a former director of the UK securities and futures authority, it says the corporate structure of the building society was “hideously flawed”, concentrating too much power in the hands of one individual, Michael Fingleton.

Dobbie says he is “frankly surprised” that “anyone [director], mindful of personal reputation, did not seek either profound change or resignation”.

The report also comments for the first time on lending to politicians, which Dobbie also says was “seriously flawed”. Irish Nationwide lent to politically exposed persons (politicians and their relatives) without applying “rules or good practice in handling personal and business conflicts”.

According to the paper, Dobbie also attacks the performance of the financial regulator for highlighting appropriate issues only to be “mollified” by then Irish Nationwide chairman Michael Walsh.

Elan defends $55m payout
Elan has defended a $55 million (€41 million) payout to chief executive Kelly Martin on the completion of the company’s proposed takeover by US rival Perrigo, the Sunday Times reports.

Institutional adviser Pirc said the payout, which includes three years’ salary and the vest of all Martin’s shares, was “among the worst we have seen”.

Elan noted that the cost to the company of any exit by Martin was $6 million. The balance comes from the vesting of share options accumulated over the 10 years since he took over the business. At that time, the shares were trading at about $2; the Perrigo takeout price is $16.50 a share.