World Cup has striking effect on activity in financial markets

In sport and in trade, it is all about winning and losing – and financial investments are affected by both 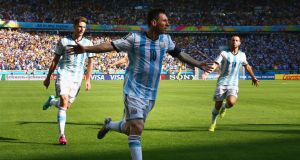 Messi business: Lionel Messi of Argentina celebrates scoring his team’s winner against Iran. Academic studies have shown that there is a big difference between wins and losses, with the latter followed by an increase in heart attacks, crimes and suicides. Photograph: Ronald Martinez/Getty Images

More than three billion people across the globe are expected to tune into the World Cup. With roughly half of the world’s population following the event, might football fever even influence the international investment community?

Probably. The World Cup has been found to have all kinds of effects on financial markets, with events on the pitch shaping the moods of those in the trading pits.

However, the boost is a short-lived affair, fading “significantly” after three months. In fact, the winning country actually underperforms by 4 per cent over the following year, according to the report.

Losers lose in the markets

Another study, Sports Sentiment and Stock Returns, which examined 1,100 football matches and stock returns in 39 countries, found a loss in the elimination stage leads to the national market falling by 0.5 per cent the next day.

It’s not that losing has especially damaging economic consequences, say researchers; it simply influences investor mood. That’s why the loss effect is stronger in the World Cup than the European Championships, and is more obvious after important games and among smaller stocks, especially in football-mad countries like Argentina, Brazil, England, France, Germany, Italy, and Spain. A similar one-day effect can be found after cricket, rugby, and basketball losses, the study found.

This may seem peculiar, given that, till now, the US has not exactly obsessed with “soccer”. However, around one-third of transactions in US exchanges are made by international investors. With each round of the World Cup, the number of losing countries increases, “until eventually there is only one winning country and dozens of losing countries”.

Although each game will have a smaller impact on the US market than on individual local markets, the US market is affected by many more games.

Traders might profit by predicting who will lose in individual games and then betting against that country’s market, but it is not easy to make accurate predictions. In contrast, betting against US markets offers a “free lunch” to traders as it doesn’t depend on the games’ results, with the effect increasing as the month-long tournament progresses.

With viewing data showing that the US’s first game at this World Cup was watched by more people on TV than the final round of the US Open Golf, the final game of ice hockey’s Stanley Cup and even the concluding game of the NBA finals, it will be interesting to see if the effect is exacerbated in the US this year.

Consequently, although abnormal trading patterns persisted in 2010, market behaviour was different to previous tournaments – the window period in which to exploit it was shorter. They predict that, in 2014, sophisticated investors will buy in the event of irrational market declines.

“The expected disappearance of the World Cup anomaly by no means implies that the sentiment effect will disappear”, the authors concluded, “but rather that transactions made by sophisticated investors will eventually remove the anomaly from the stock market”.

Normally, the company’s market capitalisation will be identical on both exchanges. However, this was not the case during France’s 2-1 defeat to South Africa in its final group stage match in 2010. On the French exchange, STMicroelectronics shares dropped following each of South Africa’s goals, but no such move occurred in Italy.

Similarly, when Italy lost against Slovakia two days later, STMicroelectronics shares fell on the Milan exchange, but not in Paris. The probability of underpricing increases as matches unfold and the elimination of the team becomes more likely, the authors found.

The title of the study sums it up nicely: It Hurts (Stock Prices) When Your Team is About to Lose a Soccer Match.

Less obvious is the finding that national indices can be moved by the results of individual clubs. One study found the Turkish market was influenced by important wins for Istanbul club Besiktas. Another, entitled Soccer, Stock Returns and Fanaticism, assessed the effect on the Turkish market of major wins for Besiktas and fellow Istanbul clubs Fenerbahce and Galatasaray. The effect “increases with the fanaticism of the teams’ supporters”, the study found.

Why? Academic literature shows there is a big difference in fans’ reaction following wins and losses. Losses are followed by an increase in heart attacks, crimes and suicides, but sporting wins do not catalyse mood improvements of a similar magnitude. Similarly, behavioural economists have shown the pain of a euro lost is roughly two-to-three times as great as the joy of a euro gained.

The same process is at work in the reaction of investors to World Cup wins and losses. Moods move markets, and moods are much more influenced by losses than wins.

1 In this strangest of recessions, what happens next for Ireland?
2 Bank of Ireland sees about 2,000 staff apply for voluntary redundancy
3 Best Covid-19 ‘influencers’ will avoid hectoring
4 Michael O’Leary is the boss you want to lead an airline out of crisis
5 Estée Lauder staff at Dublin airport plan further strike action
6 Ten of the most mysterious aircraft disappearances
7 Fortnite owner signs multimillion deal to buy Irish ‘kidtech’ firm
8 Should I switch bank now with Ulster Bank at risk of closing?
9 Dunnes Stores set to enter grocery delivery market
10 Will brother’s widow get half of our parents’ estate when they die?
Real news has value SUBSCRIBE
Save money on international transfers