Why do beautiful Chinese market analysts do better? 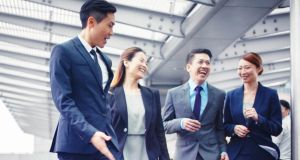 That’s according to the authors of More than Skin-deep? Analysts’ Beauty and Their Performance, a study that examined 89,056 earnings forecasts made by 2,328 Chinese analysts between 2005 and 2014. The researchers, who got 63 raters to score analysts’ attractiveness on a five-point scale, found that the most attractive analysts were more likely to issue a stock recommendation in the quarter before major public announcements – for example, an earnings warning, a restructuring or the signing of a major contract.

So what’s going on? Simple – best-looking analysts were better able to find out sensitive information from management. Such “discrimination” brings “new challenges to regulators and practitioners in the industry”, the study cautions.

Freaking out over volatility

The first quarter of 2017 was the quietest in more than half a century, with stocks recording an average daily move of just 0.32 per cent.

It’s perhaps not surprising, then, that commentators freak out when a little volatility is finally injected into markets, as happened last Wednesday after minutes from the Federal Reserve’s latest meeting revealed an unexpectedly hawkish tone.

“Stock vulnerability exposed during biggest reversal in 14 months,” one Bloomberg headline went. It was a “rollercoaster”, a “jarring move” whose “speed and magnitude highlights the vulnerability of stocks”.

The facts: US stocks were up 0.8 per cent but closed 0.3 per cent lower. As for European indices briefly falling 1 per cent – no, that’s not a “hammering”.

Calm down, people, and focus on the percentages.

US stocks are overpriced but this is not a bubble, and valuations may remain extended for the next two decades.

Grantham has been bearish for most of this eight-year bull market and frustrated investors have been departing en masse, with GMO’s assets under management falling from a peak of $124 billion to $80billion. Grantham hasn’t said he was wrong, but saying stocks may remain overvalued for decades indicates a change of tone. Similarly, Grantham now says GMO would buy stocks if markets fell 15-20 per cent. That would merely bring stocks back to last summer’s levels; at the time, GMO was warning American equities would suffer heavy falls over the following seven years.

The S&P 500 gained 5.5 per cent in the first quarter. It’s been above its 50-day average for more than 100 consecutive trading days, the longest streak in six years. Is it time for a proper market pullback?

Not necessarily, according to LPL Research strategist Ryan Detrick, whose data indicates there’s no reason to fear a persistent rally. Detrick found 18 previous cases where indices remained above their 50-day average for 100 trading days. Above-average returns followed over subsequent one-, three- and six-month periods.

Similarly, stocks have gained more than 5 per cent in the first quarter on 24 occasions since 1950, says Detrick. Above-average returns tend to follow in the second quarter and over the rest of the year. In fact, stocks enjoyed full-year gains on 23 of the 24 occasions; if one includes dividends, all 24 years closed higher.

This doesn’t mean stocks can’t dip; they can, but history suggests buying any dip remains the obvious trade.

Take Morgan Stanley, the lead underwriter in the recent Snap initial public offering (IPO). As it happens, the bank – shock, horror! – thinks Snap is a buy, slapping a hefty $28 price target on the stock.

Soon after issuing its $28 price target, however, the analysts discovered some errors in their calculations. For example, free cash flows would be $2.4 billion by 2025, not $4.05 billion as initially projected.

A shortfall of almost $1.7 billion might seem problematic, but it turns out Morgan Stanley also needed to tweak some other numbers. As a result, their price target remained unchanged; Snap was still worth exactly $28.

If you find an error that messes up your output, said Bloomberg’s Matt Levine, “you’d better go find another error to offset it”.

He’s being cynical, of course. It was just a happy coincidence.