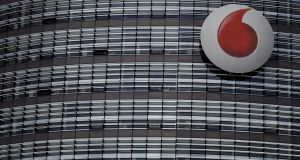 The multinational group has 334,342 small Irish shareholders on its register, each owning fewer than 1,000 shares. Photograph: Ina Fassbender/Reuters

Vodafone, the UK telecoms giant, is offering Irish shareholders the chance to exit the group.

Hundreds of thousands of Irish investors who hold shares in Vodafone are receiving letters from Wednesday morning with an offer of a special dealing service to allow them to sell their stock at a low cost, or even for free.

The Irish holdings in the British telco are part of the legacy of an initial investment in Telecom Éireann (Eir) dating back to 1999.

The Vodafone shares have not made any gains for the Irish investors and many people have been looking for the chance to sell their stock. However, given the small holdings, they have been discouraged by the cost involved.

The Vodafone offer is targeted specifically at small shareholders and is open to any individual investor with up to 1,000 shares. Corporate shareholders are excluded.

The multinational group has 334,342 small Irish shareholders on its register, each owning fewer than 1,000 shares. By comparison, there are under 67,000 investors in the much larger UK market with similar holdings.

Accidental investors Almost all the Irish shareholders are accidental investors in the group, having acquired their Vodafone shares when Eircom sold off its original mobile phone business Eircell to British telecoms giant back in 2001.

Vodafone says the special share-dealing service will run from February 23rd to May 24th.

The Irish Revenue has determined that investors would need to get a price of €4.58 a share to make a profit on their Vodafone shares.

The shares currently trade at about 225 pence sterling (about €2.96) in London, so anyone cashing out at this stage will be nursing a loss on the investment.

However, with their money already locked in for the past 16 years, and little evidence over recent years that Vodafone stock can get close to that breakeven point, many are likely to avail of the offer.

Under the Vodafone offer, people with fewer than 50 shares will be able to sell them at no cost.

Until now, anyone selling shares through the company’s share registrar, Computershare, faced a bill of 1 per cent plus €60 if they held a share certificate, or 1 per cent plus €35 for electronic holdings if using the phone dealing service.

For the smallest shareholders, with the average of 27 shares, that amounted to a cost of almost €60.80 – or three quarters of the face value of the shares.

Computershare also offered an internet dealing service at a cost of 1 per cent with a minimum charge of €40 for paper shares and €32 for those held electronically.