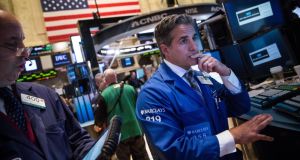 Bearish predictions of a market crash are largely hyperbolic, as we noted last week, but that doesn’t mean investors shouldn’t be concerned about valuations. In fact, there are obvious grounds for caution, with multiple signals indicating that the US stock market – by far the biggest in the world – faces years of sub-par returns.

Total US market capitalisation stands at 124 per cent of GDP, the second-highest reading in history, bettered only by the 153 per cent reading in 2000, at the peak of the dotcom bubble. Roughly two standard deviations above historical norms, the current reading indicates a severely overvalued market, and is comfortably above the 112 per cent level recorded at the 2007 market high.

Bulls question the relevance of this ratio, noting that it has indicated some degree of overvaluation (above 100 per cent) for almost all of the past 18 years. Nevertheless, the sheer scale of today’s apparent overvaluation must give investors pause for thought.

Now, as we noted last week, Cape is not a market-timing indicator and does not indicate that a crash is imminent. However, it does suggest poor long-term returns, with Cape advocates warning that stocks will be hard-pressed to keep up with inflation over the next seven years.

Bulls object on multiple grounds. They say the Cape reading of the S&P 500 has been at overvalued levels for most of the past two decades; that it is less relevant than it once was, due to accounting changes; that US indices deserve a higher rating due to their sector make-up, particularly the importance of the high-margin technology sector; and that the 2008-09 earnings collapse distorted the current figure.

However, tweaking the Cape, whether by stripping out the aforementioned earnings collapse, or by looking at different accounts of corporate earnings, or by adjusting for the S&P 500’s sector make-up, only reduces the level of US overvaluation; it does not erase it.

If anything, warned award-winning analyst James Montier, of GMO, earlier this year, the current Cape reading is “quite possibly too optimistic”. Nor is Shiller himself convinced by the bulls’ counter-arguments, warning last month that while a high Cape reading can persist for years, it has historically reverted to historical norms.

“If the mood changes again,” he said, “stock market investments may disappoint us.”

Of 43 countries analysed, the US ranked 39th, 37th and 36th in terms of valuation. That is, multiple metrics that look at long-term valuations suggest the US is one of the priciest stock markets in the world.

Bears think otherwise. Profit margins have always been volatile. They are, as GMO’s Jeremy Grantham once put it, “probably the most mean-reverting series in finance”, with competition ensuring that margins do not remain elevated for extended periods. Bulls say high valuation multiples are justified by the improving economy, which will drive corporate revenues. However, revenue growth alone will not be enough to catalyse strong earnings if margins begin to revert to historical norms. In other words, continued stock market gains appear to be dependent on corporate profit margins remaining near all-time highs.

The current Cape and Q ratios are higher than almost all of the 35 previous peaks, while dividend yields have rarely been as low as today. A higher price/sales ratio was found on just two of the bull market tops since 1955, while the price/book ratio was below today’s levels in 23 of the 28 bull market tops since the 1920s. The S&P’s trailing P/E ratio is higher than 24 of the 35 aforementioned bull market tops. Stocks have, of course, advanced further since Hulbert’s analysis, so valuations will look even more stretched today.

Current valuations are nowhere near as demanding as they were prior to the bursting of the technology bubble in 2000. And if companies do manage to grow earnings sufficiently, valuations may naturally settle into more reasonable levels.

However, US markets do appear highly valued relative to history, which is why cautious investors, such as Jeremy Grantham and Mebane Faber, recommend a rotation into less expensive markets.

The US accounts for 35 per cent of global stock market capitalisation, five times that of the next biggest market. Faber argues that investors should over-weight cheap stock markets – he especially likes European market valuations – rather than merely tracking global indices. He gives the example of Japan, which accounted for almost half of global stock market capitalisation in 1989. The Nikkei tanked over the next 20 years, hitting the returns of investors who allocated half of their portfolio to Japan.

Similarly, Grantham says investors can “patch together global equities and get a semi-respectable-looking portfolio”.

Wary of bonds (“nerve-rackingly overpriced”), emerging stock markets offer the best value, according to Grantham’s latest seven-year forecast. Additionally, he likes value stocks in Europe as well as high-quality stocks in the US. In real terms, however, Grantham reckons US large-cap and small-cap stocks are likely to be money-losers over the next seven years.