Is Wall Street’s three-month honeymoon with Donald Trump coming to an end? 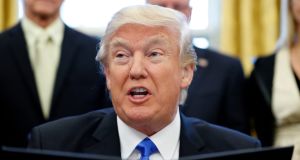 US stocks have rallied hard since Donald Trump’s presidential election victory. They have hit multiple all-time highs and outperformed global markets on the basis that the policies of “good” Trump – the pro-business president who promised to cut taxes, reduce regulation and increase spending – would boost economic growth and corporate profits.

As for “bad” Trump – the authoritarian protectionist who promised to ban Muslims and to build a “great wall” along the Mexican border – investors have been willing to bet the new president’s bark would be worse than his bite. He should be taken “seriously but not literally”, to quote Peter Thiel, the billionaire investor, founder of PayPal and Trump supporter. President Trump would be different to candidate Trump.

Trump’s first week as president suggests that this thesis ought to be revised. On his sixth day in office, he signed an executive order to begin construction of the infamous Mexican wall. That was followed by a travel ban targeting refugees and travellers from seven predominantly Muslim countries, a move widely condemned by corporate America. Technology giants Apple, Google, Microsoft and Netflix all voiced their concerns, as did Starbucks, Nike, Coca-Cola and Goldman Sachs.

Tensions are unlikely to dissipate any time soon; the new administration is also reported to be planning to curb foreign work visa programmes widely used by Silicon Valley companies.

This was not a case of financial markets applying “moral standards”, said Commerzbank. “This is all about the financial markets not approving of hectic, surprising political moves that create chaos. Measures of this kind make the US unattractive as a location for investments.”

That was echoed by UniCredit. Markets had been “too willing to give Trump the benefit of the doubt”, but Trump has been sending “increasingly persistent signals that he indeed intends to turn his populist and protectionist campaign into bad policies”.

Question marks surround the legality of the new immigration measures, and a casual approach to the rule of law has the potential to hurt US valuations, says Ritholtz Wealth Management chief executive and Reformed Broker blogger Josh Brown.

The US has always tended to be one of the world’s pricier stock markets, traditionally priced at a premium to European markets and especially to emerging markets, where valuations are generally handicapped by corporate governance concerns. The US market currently trades on almost 22 times trailing 12-month earnings and on a cyclically adjusted price-earnings ratio (Cape) of 26. In contrast, Brown notes that Russian stocks trade on a price-earnings (PE) ratio of nine and a Cape of six, while Chinese valuations are not much higher.

Cheap countries are cheap for a reason, with more trustworthy and stable countries rewarded with higher valuations. A composite index of emerging markets trades on a PE multiple of 16 and a Cape of 14; an index of developed markets has a PE of 22 and a Cape of 22.

“This is a large gap, and a lot of the difference can be explained by investor confidence that their money will be treated fairly,” says Brown. “The appearance or perception of a president who can do whatever he’d like is not going to be a long-term additive to the valuations of US businesses.”

US valuations have risen in recent months as investors priced in a stronger economic outlook, but even market bulls are cautioning that political risk could limit further upside. Goldman Sachs says that “hope will continue to lift” stocks in the coming months “before the reality of politics brings stocks lower later in the year”.

Deutsche Bank continues to think a Trump presidency will result in higher economic growth in 2017 but volatility is likely to rise as there are “too many uncertainties, unknowns and major policy changes attached to a Trump presidency for it to be a smooth year”.

Allianz economist Mohamed El-Erian says markets are now entering a new stage in their post-election reaction, one where there is a “tug of war between protectionist and pro-growth influences – and it is a much choppier phase.”

High-profile US economist Larry Summers goes further, warning in his blog last week that markets and the economy are “most likely enjoying a sugar high that will not last a year”. Summers, who served in the Clinton and Obama administrations, has consistently warned that markets are underestimating the potential for upheaval under Trump, saying his economic plans are “so far out of the mainstream of any kind of responsible economic thinking that they are the economic equivalent of creationism”.

Summers says investors should not take comfort in the fact that financial markets don’t appear to share his concerns. Markets are not always right: the best post-election market performance of the last century occurred during Herbert Hoover’s transition, not long before the 1929 crash, while the strong stock markets experienced in the early years of the Hitler and Mussolini governments were hardly a precursor to good times.

Good investing is not necessarily a matter of buying into pro-business administrations, he says, noting that the best returns have traditionally occurred during Democrat administrations.

In any case, Trump’s ostensibly pro-business policies have been overstated, says Summers. Some sectors will benefit from regulatory changes but this may be offset by new populist policies, such as price restrictions placed on pharmaceutical companies.

Significant tax reform may not pass until 2018; in any case, tax reforms do not always catalyse significant market gains. Additionally, almost half of S&P 500 revenue is earned abroad; not only will this not be “enhanced by new US domestic policies”, it “may be hurt by new nationalist measures”.

“I am not sure which is more difficult: predicting what President Trump will do next or timing the market,” says Summers. However, the recent actions of the new administration mean it is now “much easier to imagine downside than upside scenarios”.

1 In six months we will be in the grip of a 1980s-style recession
2 Donohoe warns of cost to State of pandemic measures as public finances deteriorate
3 Chartered Land gets green light for Dublin’s tallest tower on Parkgate Street
4 Property price drop of up to 12% this year a ‘reasonable’ assumption – McDonagh
5 Angela Merkel sweeps in to save the euro zone
6 Avoca wins battle with Monkstown locals over cafe operation
7 Aer Lingus wants quarantine period axed to resume flights in July
8 Google facing $5bn lawsuit for tracking in ‘private’ mode
9 Should my mam wait for house prices to drop before buying?
10 Stocktake: Has Warren Buffett lost the magic touch?
Real news has value SUBSCRIBE
Save money on international transfers