No amount of risk management could have saved traders 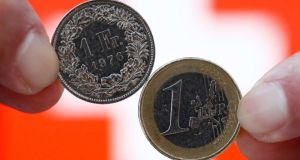 Swiss National Bank’s decision to end the Swiss franc’s peg with the euro has resulted in the euro falling as much as 41 per cent against the franc. Photograph: Thomas Hodel/Reuters

Last November, I reported on a French survey that found nine out of 10 foreign exchange traders lost money, and cautioned that leveraged trading is almost invariably “a fast road to the poorhouse”.

Many hubristic traders who thought otherwise will have learned an expensive lesson in recent weeks, following the decision of the Swiss National Bank (SNB) to end the Swiss franc’s peg with the euro. The move caused a market earthquake, the euro falling as much as 41 per cent against the franc, with enormous losses inflicted on brokers and traders alike.

UK online broker Alpari and New Zealand outfit Global Brokers collapsed, while shares in Forex Capital Markets (FXCM) plunged more than 90 per cent, after it announced it was facing losses of $225 million.

Citigroup and Deutsche Bank are estimated to have lost in the region of $150 million apiece, while one veteran hedge fund, Everest Capital, is to close its $830 million Global fund after it was wiped out by the move.

Foreign exchange brokers offer huge leverage to clients, with leverage ratios of 200:1 being the norm in Britain and Europe. Some even provide amateur traders with up to 500 times their money, meaning that someone with a €1,000 balance could make a €500,000 bet.

Regulators are stricter in Japan and the United States, where leverage ratios are capped at 50:1 and 25:1 respectively, although that would not have been sufficient to avoid disaster.

Ordinarily, such a position would have been liquidated long before the losses got out of hand. Foreign exchange traders typically limit their losses by using stop-loss orders that get triggered when the price falls below a certain level. In this case, however, there were no bids below €1.20, so the euro immediately collapsed in value, rendering the stop-loss orders useless.

Ironically, trading the Swiss franc would previously have been viewed as a low-risk bet. It had been stuck in a tight trading range over the last year, between €1.20 and €1.236.

It could be argued that excessive leverage is not actually the problem in this case, that this was a black swan event, something one never – well, almost never – sees in major currencies. No amount of risk management could have saved traders, given that even a very low leverage ratio of 4:1 would have been enough to doom one’s account.

According to the Autorité des Marchés Financiers, France’s regulator, 89 per cent of French foreign exchange traders lost money between 2009 and 2012, suffering average losses of almost €10,900.

A recent US study found that retail traders lose an average of 3 per cent per week. Quarterly client profitability statistics released by the major US brokerages reveal that roughly two-thirds of traders lose money in an average quarter.

Even this likely underestimates the true losses, as clients who blew out their accounts in one quarter will not appear in the figures for the following quarter. Indeed, the average retail trader gives up after just four months, according to the US-based National Futures Association.

This naiveté is all too evident in online trading forums such as Trade2win. “I am currently teaching myself about the forex market with the hope to begin trading in it within the next six months,” one recent post reads. “I have little to no knowledge, as I have just begun reading about it.” The poster says he is currently reading Currency Trading for Dummies, but is “struggling to understand” some basic concepts. His questions include: “What is the margin requirements from the broker? What is an online forex broker? What is unrealised and realised profit + loss?”

Such traders are unlikely to appreciate that currency trading is a zero-sum game, and that they are competing against professional traders with more knowledge and more resources. Nor are they likely to be aware that it’s common for many foreign exchange brokers to make money by taking the opposite side of their customer’s trades.

Concerns regarding the retail currency market have grown in the US in recent years. Leverage ratios were reduced from 100:1 to 50:1 in 2010, although calls to reduce them to 10:1 were rejected following industry opposition. More recently, the funding of accounts via credit cards was banned, following a survey which found that this was predominantly used by poorer people who could ill afford trading losses.

In Europe, where 1.4 million people trade currencies, regulations are much more lax. Funding via credit cards is allowed; leverage ratios of 500:1 are not uncommon; some brokers allow people to open accounts with as little as €100; others lure punters via cash promotions.

As most client accounts will be emptied within months, brokers must always be on the lookout for new clients. Increasingly, advertising budgets are directed towards sports sponsorship; Alpari’s name appears on West Ham United’s shirts, while FXPro has sponsored teams like Fulham, Aston Villa and AC Monaco. Major football teams such as Liverpool, Barcelona and Juventus have also entered into deals with currency outfits in recent years.

Critics argue that the industry’s sales tactics are questionable, and that leverage ratios, in particular, need to be promptly reduced. Calls for greater regulation are only likely to increase following the Swiss franc debacle.

FXCM made the same argument in 2010, saying that proposals to reduce leverage ratios to 10:1 would “have a devastating impact on the retail forex industry”.

FXCM is now owed $225 million by its clients. As the old saying has it, be careful what you wish for.