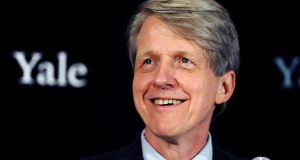 Eugene Fama’s academic career is built on the efficient market hypothesis (EMH), dismissed by Robert Shiller as “one of the most remarkable errors in the history of economic thought”.

Little wonder eyebrows were raised when both were last week awarded the Nobel memorial prize in economics for their analysis of asset prices. Few dispute Shiller’s credentials, given his timely warnings on the dotcom and housing bubbles. Not so Fama. His belief that markets get prices right, that rationality rather than animal spirits guide investor actions, has been widely derided.

That doesn’t mean Fama, a formidable researcher, didn’t deserve his prize, or that EMH is worthless. Few investors ever beat the market and Fama’s findings helped grow the low-cost index investing industry. Investors who familiarise themselves with EMH would likely save time and money.

Still, EMH has also done much damage, and Fama has, at times, been absurdly rigid. In a 2010 interview, he dismissed talk of housing and credit bubbles, saying: “I don’t even know what a bubble means. These words have become popular. I don’t think they have any meaning.”

The housing crash was not predictable, and most bubbles were “20-20 hindsight”; financial markets “were a casualty of the recession, not a cause of it”.

Ivory tower stuff. Shiller’s outlook makes more sense: “When I look around, I see a lot of foolishness, and I can’t believe it’s not important economically.”


A mixed week for UK fund legends
The UK fund industry was shaken last week by news that Neil Woodford is to leave Invesco after a 25-year run. Woodford, who will set up his own fund next year, manages £33 billion, and is often termed Britain’s answer to Warren Buffett. A long-term value investor who avoided the dotcom and banking crashes, his high-income fund turned £1,000 into £23,000 over the years, compared to an estimated £10,000 for the overall market.

Impressive? Undoubtedly, although compound interest flatters the figures. Multiplying your returns 23-fold over 25 years works out at 13.36 percent annually, compared to 9.65 per cent for a ten-fold return.

That’s great, but not in the league of Buffett, whose annualised 21.5 per cent returns are double the S&P 500’s. Eugene Fama and Co might ask if Woodford can keep outperforming, or if he was lucky to make a few big macro calls that worked out. Another UK fund legend, Anthony Bolton, took a battering after coming out of retirement in 2010 to manage funds in China. Rather than buying into his new fund at any cost, a strong case can be made for investors to replicate Woodford’s portfolio through low-cost ETFs focused on UK value stocks. (Tobacco and pharmaceuticals feature heavily in his portfolio).

Schroders’ biggest fund lost 40 per cent of its assets under management after Richard Buxton left the firm this year; an even larger exodus of Invesco investors is likely.

Hedge funds have long hated this bull market
Hedge fund bets on a US market decline are close to their highest levels of 2013, potentially fuelling a year-end rally.

Bets on market falls, while not extreme historically, are just short of 2013’s high.

That leaves traders exposed in the event of “good” news, potentially creating a short squeeze whereby they are forced to buy back into the market to close their losing bets, ironically fuelling further market gains.

Some 89 per cent of S&P 500 companies have gained, a percentage unseen in over two decades.

Hedge funds have long hated this bull market. Their returns have been less than half that of the S&P 500 since the rally began in 2009. That’s unlike the 2002-07 bull market, when hedge fund returns closely tracked the market.

With the resolution of the US government shutdown debacle and stocks facing into their seasonally strong winter period, hedge funds will be fretting that the performance gap may widen even further.

Equities come roaring back across the world
World equities are nearing 2007’s all-time high. The 58 indices that make up the World Federation of Exchanges now have a total market capitalisation of $60.7 trillion, just shy of October 2007’s $62.8 trillion high. Markets collapsed, erasing almost $34 trillion, but have more than doubled since March 2009.

September, historically an ugly month for equities, was anything but, with the $3.3 trillion monthly gain proving the sixth-biggest in the WFE’s 18-year history. Global markets are up 14.8 per cent over the last 12 months.

The Iseq’s 41 per cent advance was the third-highest in the world, dwarfed only by Greece (117 per cent) and Argentina (58 per cent).

1 How to gift your child a house deposit . . . tax free
2 BOI customers to be charged twice with bank fees on New Year’s Eve
3 Irish start-up which developed facial recognition for cows raising over $50m
4 Coveney says Greencore business ‘absolutely smashed’ by Covid-19
5 Ryanair warns it may reduce more services and relocate operations
6 Workers have little idea of the cost of retirement income
7 Irish designer of Oxford vaccine: ‘I’ve never worked so hard in my life’
8 Court protection petition was prepared ‘in secret’ from board, High Court told
9 We continue to ignore massive pensions elephant in the room
10 Son putting elderly dad under pressure to sign over land
Real news has value SUBSCRIBE
Save money on international transfers