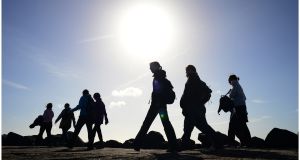 Government moves to increase the age of retirement will help. Photograph: Bryan O’Brien

In a report published today, they say current contributions to the Social Insurance Fund from which the State pension is paid – mostly PRSI – “will be insufficient to continue to pay current levels of benefits in future years.”

They raise similar concerns about public sector pension arrangements where they forecast a threefold increase in the pension bill over the next 40 years.

The McKinsey report, “Is Ireland’s Population Ready for Retirement?”, examines what it terms the five pillars of the system – means-tested State non-contributory pensions; the State contributory pension; occupational pension assets; other financial assets such as stocks, bonds and life policies; and finally investment in property and business, excluding the family home or any privately-owned business.

Ireland scores well on poverty in a relative sense, with a poverty rate in retirement of 6.9 per cent that is lower than both the poverty levels for the Irish population as a whole and for retirees in most other OECD states.

McKinsey finds that people in the bottom 40 per cent of household income do not suffer a fall in consumption power in retirement with the State pension replacing a large part of their pre-retirement spending. However, those on middle and high incomes (above €30,000) are more likely to do so. This is because they have not invested in occupational pensions at all or not in sufficient amount to meet this standard of living.

As it stands, the McKinsey report says 29 per cent of people will require significant adjustments in their standard of living on retirement.

“The cumulative deficit is estimated to rise to approximately €133 billion by 2040,” they state. Despite concerted efforts to reduce that deficit in recent years, “structural systematic reforms are required to effectively curb it”.

Maintaining payments at current rates would require an increase in contributions of five percentage points from all workers, McKinsey states. The alternative would be to cut benefits by around 35 per cent across the board.

In reality, Government moves to increase the age of retirement and acceptance in principle of auto-enrolment in workplace pensions will help. But change in the State pension is still likely.