Influential investors are warning of trouble, but following them may unwise 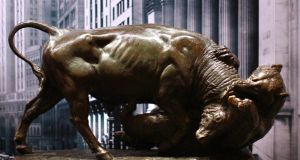 A bronze of a bull fighting with a bear is displayed at the Museum of American Finance on Wall St in New York City. Photograph: Spencer Platt/Getty Images 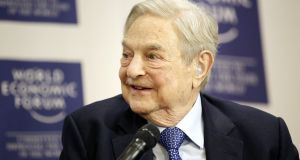 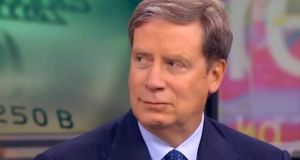 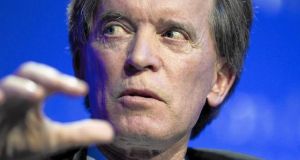 Bill Gross: proliferation of negative interest rates is a “supernova that will explode” 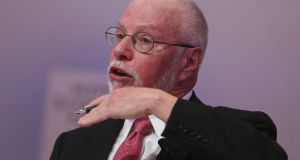 Paul Singer: we may be “in the early stages of a global recession” 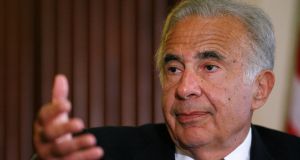 Investor Carl Icahn: rock-bottom interest rates could not last much longer “without having these bubbles explode on you”. Photograph: REUTERS/Chip East/

Some of the world’s most prominent investors are making increasingly bearish noises regarding the health of global financial markets. Could another financial crisis be looming?

Iconic investor George Soros seems to think it’s a possibility. Emerging from semi-retirement to more closely oversee his $30 billion family hedge fund, Soros has been stocking up on gold as well as buying put options that would pay off in the event of S&P 500 declines.

Soros’s former trading partner and fellow billionaire Stanley Druckenmiller is also concerned, warning last month that the seven-year rally in equities was “exhausted” and that it was time to “get out of the market”.

And Bill Gross, the world’s most influential bond investor over the last few decades, recently tweeted that the proliferation of negative interest rates is a “supernova that will explode”.

Billionaire hedge fund manager Paul Singer believes we may be “in the early stages of a global recession”, adding that this is a “very dangerous time in the financial markets”. Activist investor Carl Icahn, too, is prepared for a market downturn; last month, it was reported his investment fund had a net short position of 149 per cent at the end of the first quarter, while recent weeks have seen Icahn warning that rock-bottom interest rates could not last much longer “without having these bubbles explode on you”.

The immediate worry for markets is the possibility of Brexit, with Soros warning that a British vote to leave would result in the disintegration of the European Union becoming “practically unavoidable”. Soros expects the Remain camp to prevail in Thursday’s referendum.

The near-term consequences for equity markets could be dire if Britain votes to leave – risk-modelling firm Axioma recently warned European indices could lose about a quarter of their value, while London-based Absolute Strategy Research estimates British equities could fall by as much as 20 per cent.

The aforementioned billionaires, however, are more concerned by other potential dangers.

Over-leveraged China is one such concern: Druckenmiller agrees, saying China has been the “engine of global investment” but its policy of “zombie lending” is no longer effective.

Icahn cited Chinese weakness as the trigger for his recent decision to sell his large shareholding in Apple.

The other obvious source of potential financial instability is global central banking policy, a subject that particularly exercises Gross, Singer and Druckenmiller.

Government bond yields, Gross notes, are the lowest in “500 years of recorded history”. Around the world, investors are paying governments to park their money, with negative-yielding debt recently topping the $10 trillion level.

Current global monetary policy is indeed unprecedented. Gross is right to say that not so long ago, “even the most Einsteinian-like economists would not have imagined such a state”. Similarly, it’s hard not to be concerned by warnings from investors of the calibre of Gross, Druckenmiller and Soros.

Nevertheless, there are various reasons why ordinary investors should not rearrange their portfolios on the basis of warnings from big-name players.

Firstly, even the very best investors frequently get it wrong when it comes to market calls.

In 2010, for example, Bill Gross warned British gilts were “resting on a bed of nitroglycerine”; instead of rising, British bond yields continued to fall. The following year, Gross sold his US treasury bonds on the basis that the Federal Reserve’s quantitative easing programme would cause inflation and higher yields, warning that investors who thought otherwise would “get cooked like frogs in an increasingly hot pot of water”; again, yields continued to plummet, Gross later admitting he had “lost sleep” over this “mistake”.

In 2012, he said the “cult of equities” was “dead”, only for stocks to rip higher over the following years.

Last year, he said the German bund market was the “short of a lifetime”; although his timing was good – yields did indeed spike over the following months – the downtrend soon resumed, so much so that Germany’s 10-year bond yield last week fell into negative territory for the first time.

Soros, too, admits to “crying wolf” in the past. In 1987, he said a new international currency needed to replace the dollar to avoid “financial turmoil, beggar-thy-neighbour policies leading to worldwide depression and perhaps even war”. In 1998, he said the global capitalist system “is coming apart at the seams”.

As for China, his concern is not new. As far back as 2013, Soros was cautioning that the Chinese financial system bore “disturbing similarities” to the US subprime market in 2007-2008.

Druckenmiller, who averaged annual returns of 30 per cent over the 1986-2010 period, could also be accused of crying wolf in recent years.

In 2011, he said the US risked finding itself “being Greece somewhere down the road” if government spending was not reined in, adding that a financial crisis “is surely going to happen as big or bigger than the one we had in 2008 if we continue to behave the way we’re behaving”. A similar warning of “a storm coming, maybe bigger than the storm we had in 2008, 2010” was uttered in 2013.

Paul Singer has been even more strident. A hard-core conservative, he condemned the Federal Reserve as a “group of inbred academics” in 2011, saying the next market crisis “will play fast, very fast”. In 2014, he was mocked for saying investors should consult property prices in London, Manhattan and the Hamptons as well as high-end art prices “to see what the leading edge of hyperinflation could look like”.

Secondly, contrary to what recent headlines might suggest, Gross and his fellow bears are not actually saying a market crisis is around the corner. Gross, for example, said the $10 trillion in negative-yielding debt would explode “one day”, whenever that might be. Icahn, whose investment fund fell 13 per cent in the first quarter, says it is “ridiculous” to think anyone can call the short-term outlook, adding that he owns many businesses in order to have a “built-in hedge”. Druckenmiller has been busy loading up on gold, but his portfolio also has substantial long positions in stocks such as Facebook, Alphabet (Google) , Amazon and Coca

As for Soros, his fund was buying S&P 500 put options that would profit from market declines in 2013, 2014 and 2015, but it was mainly long stocks during those periods. The financial media tends to invariably portray Soros’s actions in a bearish light; a more accurate interpretation might be that he is acutely conscious of hedging his bets in order to protect his portfolio.

Thirdly, successful investors tend to be a flexible bunch. Carl Icahn has been a cheerleader for Apple in recent years, saying the company’s shares should be trading at $240. However, he sold his entire shareholding earlier this year, when the stock was at less than half that amount, indicating he had been simply talking his book.

Druckenmiller once described Soros as “the best loss-taker I’ve ever seen”, someone who “can easily walk away from the position”. Soros can change his mind in an instant, often on the basis of gut feeling – he has said in the past that the onset of bad backache pain can be a signal that he needs to change his portfolio.

Druckenmiller, who has never had a losing year in his investing career, is similarly flexible, as evidenced by his behaviour during the market crash on Black Monday in 1987. He had bought stocks on the previous Friday only to change his mind after studying charts over the weekend; on Black Monday, he dumped his stocks and finished the week with a profit. Similar about-turns were performed during the dotcom bubble and crash in 1999-2000. “I’ve always loved to play games, and face it, investing is one big game,” he once said. “You need to be decisive, open-minded, flexible and competitive.”

One suspects investors such as Soros and Druckenmiller will do just fine in 2016, whether or not their forecasts come to pass. Ordinary investors, however, tend to be less adept at playing market “games”; ignoring the big-name investors may be a wiser strategy than trying to piggyback on their trades.