Should everyone in Ireland be paid €752 a month for doing nothing? 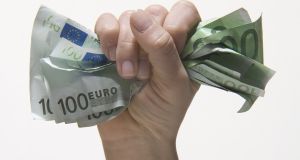 In simple terms, a universal basic income (UBI) is an income which is provided without conditions to every adult and child

There’s nothing new about the concept; as long ago as 1797 political activist Thomas Paine proposed it in his pamphlet Agrarian Justice. However in recent times there has been an increasing amount of rhetoric pushing the concept of a basic income, which is handed over by the State to all, no questions asked.

So much so that on June 5th, Switzerland voted on whether or not to introduce such a system.

What’s behind the movement, though, and could the concept of paying every adult in Ireland €188 a week – regardless of their needs – actually work?

What is a basic income?

In simple terms, a universal basic income (UBI) is an income which is provided without conditions to every adult and child. It would replace most welfare benefits and guarantees a standard amount to every citizen, regardless of need.

Like child benefit, such an income would be automatic and would not be means tested.

“It’s generally defined as an unconditional payment distributed by the State to every legal resident that comes into their bank account every week or every month from cradle to grave,” says Anne Ryan of lobby group Basic Income Ireland. “It’s not enough for luxuries but it’s enough to live reasonably well.”

A basic income has three key characteristics: it is sufficient; it is unconditional; and it is universal.

“It’s an expression of care within society – everyone deserves a basic element of care,” says Ryan.

Proponents of basic income also suggest that it gets rid of the poverty trap that exists when people on social welfare take up some work and end up less well off.

“It eliminates that immediately,” says Ryan. “The existing system acts as a negative incentive to people as it prevents people from doing useful work.”

She notes that a lot of “really useful” work, such as creative endeavours or caring for small children or elderly relatives, is unpaid.

And, by offering a basic income, the State could also facilitate people looking to start up in business on their own, Ryan asserts.

“It’s not a payment for the work they’re doing; it’s a payment that allows them to have choices.”

One feature of a basic income regime is that it is unconditional. So, for instance, those currently on unemployment benefit would not have to provide evidence of job searches etc.

“It gets rid of the stigma because people don’t have to justify themselves,” says Ryan. 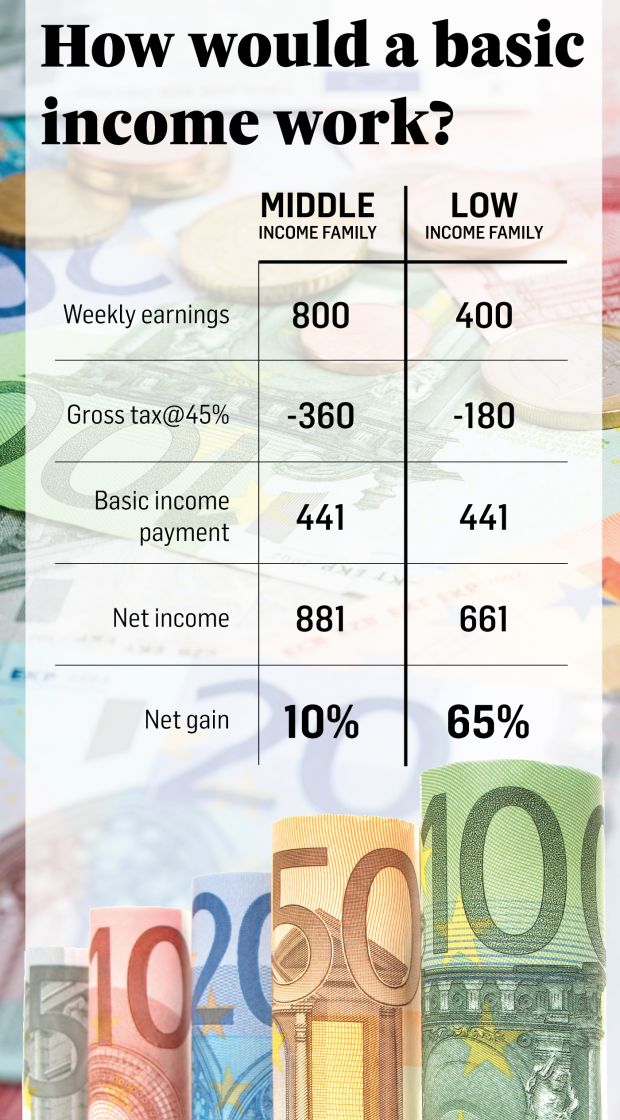 There is also a fear, however, that it would disincentivise people from working. The Economist recently argued that such a move would destroy the conditionality on which modern welfare states are built and that “large segments of society could drift into an alienated idleness”.

Nevertheless, it is a concept that is increasingly gaining currency. Former Greek finance minister Yanis Varoufakis has argued that a basic income is a necessary concept as automation and robots increasingly eliminate jobs, while Prof Christopher Pissarides, the Nobel Laureate economist, argued for universal basic income at the World Economic Forum at Davos earlier this year.

He favours a new model of redistributions helping those whom the market would have left behind. He did caution, however, that introducing a basic income should be done without taking away the incentive to work at the lower end of the market.

Switzerland has become the first country to put the concept to the test by asking people to vote on it.

Micheál Collins, senior research officer at Neri – the Nevin Economic Research Institute – says the vote in Switzerland reflects a broader set of discussions and thinking around how to make welfare and taxation systems better, pointing to the increasingly precarious trends in working, such as the introduction of zero-hour contracts. This, combined with an ageing population, will put severe stress on the public finances.

“The welfare system as we currently know it is unsustainable,” says Collins. “When people look at it [basic income], it looks quite attractive,” he says, adding: “If you were starting from scratch, the system you would introduce is basic income”.

It is against this background that the Swiss voted earlier this month on whether or not the government should introduce an unconditional basic income to replace various welfare benefits.

However the proposal was overwhelmingly rejected, with 77 per cent voting against it, amid concerns that “billions” of people could try to move to the country if the income was to be introduced.

Nonetheless, that still means a substantial 23 per cent voted in favour of the proposal.

The group behind the movement, Basic Income Switzerland, sees it as a moral victory and a step in the right direction.

An idea that is spreading?

Switzerland is not the only country to consider introducing some form of basic income concept. Others have gone so far as to put into play some aspects of the concept.

Finland, for example, is testing a basic income concept on a sample of the population, after deeming a full, unconditional basic income proposal too expensive to work.

From next year, some 10,000 people will be receiving €550 each month, which is deemed to be equivalent to unemployment and welfare benefits that cover food, personal hygiene and clothing. It is an unconditional payment and is not means-tested.

If successful, the trial could then be implemented across the country. It is estimated that about 69 per cent of Finns support such a concept.

Kela, the Finnish Social Insurance Institution which is designing and running the experiment, hopes it will help explore how to diminish, and possibly abolish, the work disincentives and income traps which weaken the present social transfer system in Finland.

The Netherlands has also set in play its own experiment. Utrecht, one of the largest cities in the Netherlands, has introduced the concept of basic income as part of its “See What Works” initiative. Through this, it will compare the effect of four types of basic income plus a control, by allowing small groups of benefit claimants to be paid €850 a month.

The payment will not be means tested and applicants will be able to keep any earnings they may make from work on top of that. Efforts are also being made to put basic income on the national agenda in the Netherlands.

Meanwhile in the US, start-up incubator Y Combinator, which helped to launch Dropbox and Airbnb, is funding research into the concept with the aim of finding out “how people’s happiness, well-being and financial health are affected by basic income, as well as how people might spend their time”.

It is set to run a short-term pilot in Oakland, California, giving people an unconditional income.

“We hope a minimum level of economic security will give people the freedom to pursue further education or training, find or create a better job and plan for the future,” Sam Altman, the president of Y Combinator, says of the project.

It is not just a trend internationally, though; there is also an emerging movement behind the idea in Ireland. The Green Party has long been in favour of the establishment of a basic income, while Fianna Fáil has talked about establishing a commission to examine the idea.

Basic Income Ireland suggests a weekly income of €200 would be deemed sufficient in an Irish context. However, figures put together by Social Justice Ireland suggest that a lower income, of €188 a week for everyone aged between 18 and 65, would be affordable, based on 2012 Exchequer revenues. There would be a top-up for those qualifying for the State pension (currently €233.30 a week) and habitual residency would be required to qualify for the payment.

Some argue that a basic income for all could leave those most in need less well off. However, Ryan says such a system would have to allow for special payments for those with special needs, disabilities etc. Allowances such as rent allowance would continue to be paid. “No one should be worse off than they are now,” she says.

Under Basic Income Ireland’s proposals, a flat rate of tax of about 45 per cent would be introduced to pay for the measure.

It would mean that those on low incomes would see a bit of uplift to their take-home pay, while those on middle incomes wouldn’t see much of a difference. High earners would be getting a bit less (see table).

Could we afford it?

“Without doubt, it would be an expensive thing to introduce,” says Collins, “but it very much clearly depends at what level one sets it.”

In 2012 he conducted research into the topic, which showed that if such a system was to be introduced in Ireland, somewhere equivalent to existing welfare rates, the cost would be about €30 billion – similar to what the State pays today on welfare/tax credits etc.

“You could almost bring it about on a break-even basis, but if one were to move beyond that (about €188 a week) and offer a higher level of basic income, then clearly that would require the need to create more resources to fund that basic income,” he says.