Former customers of Bernard Madoff may soon recover an additional $496.8 million after settlement 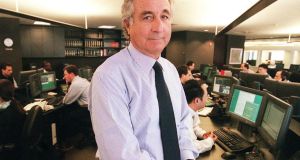 Bernard L. Madoff, chairman of Madoff Investment Securities is seen on his Manhattan trading floor in this photo taken Dec. 30, 1999 in New York. The former Nasdaq stock market chairman was arrested on a securities fraud charge in 2008, accused of running a phony investment business that amounted to nothing more than a “giant Ponzi scheme.” (Photograph: AP Photo/The New York Times, Ruby Washington)

Former customers of Bernard Madoff may soon recover an additional $496.8 million as a result of a settlement with two “feeder funds” that was announced yesterday by the trustee liquidating the swindler’s firm.

The settlement, with the Herald Fund SPC and Primeo Fund, both based in the Cayman Islands, is one of the largest obtained by the trustee, Irving Picard, since the failure of Bernard L. Madoff Investment Securities LLC in December 2008. If approved by US Bankruptcy Judge Stuart Bernstein in Manhattan, the payout would push the sum recovered by the trustee for Madoff customers above $10.3 billion.

That equals about 59 per cent of the estimated $17.5 billion of principal they lost in Madoff’s decades-long Ponzi scheme. A hearing has been scheduled for December 17th.

Nearly $6 billion has been distributed so far. “By any measure, the settlement terms are highly advantageous, not only to BLMIS direct customers with allowed claims, but also potentially to the indirect investors in the Herald Fund,” Oren Warshavsky, a lawyer who negotiated the settlement for Picard, said in a statement.

The accord resolves Picard’s lawsuits against Herald and Primeo to recoup sums they withdrew from Madoff’s firm in the six years before that firm collapsed. Herald will receive a $1.64 billion claim in the Madoff firm’s liquidation, entitling it to “catch-up payments” from four prior distributions that Picard made to customers.

Out of these payments, the first $496.8 million will go to other Madoff customers. Herald will then share in future recoveries obtained by the trustee. The Herald and Primeo funds are both also in liquidation.

Picard has filed more than 1,000 lawsuits against feeder funds that sent customer money to Madoff, and “net winners” who took out more from Madoff’s firm than they put in. His largest settlement is a $7.2 billion accord with the estate of Jeffry Picower, a Florida investor who died in 2009. Picard also recouped $325 million from JPMorgan Chase & Co , once Madoff’s main bank.