How to cope with an official audit by the Revenue

What does an official audit entail and what is the best way to handle it? 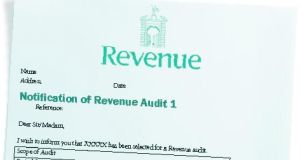 When getting your tax return ready for the November 13th deadline, finding the funds to settle your bill might have been your primary concern.

However, it may not be the last you will see of your 2013 tax returns. If you’re selected for audit – as more than 8,000 taxpayers were in 2013 – the real work might only be beginning. According to the Revenue Commissioners, some 8,037 audits were completed in 2013 yielding €312 million. Of these, more than two in three (69 per cent) resulted in a settlement being paid to the Revenue.

If you have been selected for an audit, Derek Andrews, tax director, with Andrews Tax Consulting, says there are four things you’ll need to think about: if there is a tax settlement, how much is it going to cost?; the professional cost, including fees for accountants and tax advisers and even potential legal fees; the personal anxiety arising from an audit; and the time it takes to deal with it.

How does the Revenue select people for audit?

This means that Revenue will look at your taxes in relation to averages across your sector – for example, declared income for a particular activity which is below the average might be a trigger.

“Revenue selects a high proportion of their audit cases on a risk-based approach and a low salary to contract value could well be a possible trigger,” says chartered accountant Tommy McGibney. “I’ve seen full Revenue audits because Revenue didn’t believe their income was as low as it was, but if a person is ill for example, it can be.”

Through its REAP technology, the information the Revenue now collects has grown significantly.

“Revenue collates information from more than 50 sources including social network analysis and coupled with information gathered through the tax network, it can identify businesses that are not registered, that are under-reporting income and/or present risks of fraud,” Andrews says.

Secondly, Revenue finds cases for audit by the various projects it runs from time to time which examine tax compliance levels in particular trades or professions. Revenue will often pick a sector where non-compliance is high; previous investigations have looked at retail jewellers and Chinese restaurants. Its most recent special project was looking at self-employed contractors (see panel). McGibney says: “You can be sure that there will be more in the pipeline.”

Another area of interest for Revenue is looking at the tax affairs of medical consultants, which to date has yielded about €12 million from about 80 cases.

The Revenue is also focusing on including directors’ loans. As Andrews notes, during the boom company directors often took money out of their companies on credit cards, with accountants later treating this income as a bonus or other income and paying any tax due on it.

However, as turnover plummeted some companies didn’t have the funds to settle tax owed so accountants put the money down as directors’ loans.

But tax issues, including benefit-in-kind and withholding tax, arise from directors’ loans and this is now an area of focus for the Revenue.

It is also still focusing on shadow economy activity which includes businesses that engage in various practices of non-compliance with tax and duty obligations. “Projects surrounding cash businesses, white collar trades, the construction sector and rental income are ongoing. Businesses in which cash is a predominant method of payment will continue to be a focus in 2015,” a Revenue spokeswoman says.

The third avenue is random selection, which means that every single taxpayer stands a chance of being audited. This is the one which even the most prudent of taxpayers may fear. However, the good news is that only a small proportion of cases are selected this way – 400 in 2013 – thanks to the technological advances made by the Revenue in recent years which means it focuses on high-risk cases.

I have been asked for an assurance check. What is this?

Last year, more than 600,000 such checks were made and it has become an increasingly fruitful exercise for Revenue, with the yield from non-audit compliance interventions up by 78 per cent, to €236.4 million in 2013. “If Revenue finds that a number of people are overestimating claims, they will then target a large number of people to fish out more,” says McGibney. “It tends to be very productive because you can smoke out a lot of people with very little work.”

Andrews agrees that such probes can be productive for Revenue.

“I often see a letter from Revenue asking, ‘Have you declared all your rental income?’,” says Andrews, noting that some people take a quick view and reply that they have. “If you receive a letter like this you have to assume that there’s a reason behind it and they’re basing it on information they’re getting from third parties. I advise people not to give a kneejerk answer.

“If it’s a non-audit intervention, I would say try and engage properly with the process, try not to and duck and dive and engage early.” He also says that giving incomplete or delayed answers can frustrate Revenue officials. “A non-audit intervention is then more likely to become an audit, and a one-year audit may become a three-year review,” he says.

“You have the right to question Revenue’s right to raise the question,” says Andrews. “Revenue can only generally ask questions where they have reason to believe there’s something wrong.”

Probing the Revenue in this way can shed a light on why you or your company has been selected for audit.

“In theory, Revenue will never disclose why you’re chosen for an audit. But if you manage your relationship and develop a dialogue with them, it’s likely that they’ll tell you at the beginning or end what triggered the audit,” Andrews says.

Is there any grey area in audits?

“Materiality comes into it. If it’s a small deduction that’s wrong, they’re not really that bothered with that kind of thing.

McGibney says that a small problem in one year may be “material” if there’s a history of it. “A few grand every year turns into a big thing . . . it can become material very quickly.”

Does an audit just relate to the most recent set of accounts?

“A typical example is when a sole trader claims standard civil servant motor expenses for 2013; there is nothing then to stop Revenue going back a long way and looking for payment of tax shortfall plus interest plus penalties,” McGibney says.

Generally speaking, Revenue can only go back five years after the end of the tax year or year of assessment in which the return is made. Andrews says this means that 2009 tax returns, for example, can be reassessed anytime up to December 31st, 2014.

If Revenue officials find that earlier returns were not materially correct, they may have cause to go back even further.

Is there any way of reducing penalties if I have underpaid tax?

Typically, the level of penalty applied under this approach will be much lower. You also won’t be at risk of having your settlement published by Revenue.

You can also submit a qualifying disclosure even if you haven’t been selected for audit. Again this approach will incur lower penalties.

What interest and penalties will I have to pay?

This means that someone who fails to pay €30,000 in tax due to a “default in the careless behaviour without significant consequences category of tax default”, may face interest of €700 and a penalty of €4,500 (15 per cent), bringing the total bill up to €35,200. If the tax shortfall was due to “deliberate behaviour”, however, the penalty would have been as much as 75 per cent or €22,500.

If you can’t find the money to settle your bill, you may be able to enter into a phased payment arrangement with Revenue.

In theory, Revenue doesn’t negotiate. In practice, however, Andrews says that it is a bit of a grey area and that Revenue has to be “pragmatic”. It can’t dedicate unlimited resources to an audit that might only throw up €10,000.

Will my name be printed in the paper?

But, if you end up receiving a penalty of €33,000 or more or if this penalty exceeds 15 per cent of the tax ultimately due, than your name will likely be published in Iris Oifigiúil (Irish State Gazette), in national newspapers and on the Revenue’s website.

You can avoid publication if you make a voluntary disclosure before the audit starts. Identifying irregularities: National Contractors Project It started with Revenue officials in Cork identifying a number of self-employed contractors incorrectly claiming travel expenses, but before long had become a national project.

The Revenue’s National Contractors Project, which has been running for several years, has identified a number of irregularities, including one-man companies claiming family holidays to the sun as a tax expense and taxpayers claiming pension contributions as a deduction but then cancelling the pension payment.

The incorrect claiming of mileage and subsistence expenses is another major element of the project, with contractors found to be incorrectly claiming expenses for travel.

“Unless they’re (contractors) doing a significant amount of work at their home office, Revenue doesn’t allow costs for travel to the normal place of work,” says chartered accountant Tommy McGibney.

In some of the worst cases, up to 70 per cent of income was extracted in this manner.

Since then the Revenue has investigated some 580 companies and raised additional tax of €14.5 million.

In addition, about 200 companies remain under audit.