How much is a stay-at-home parent worth? 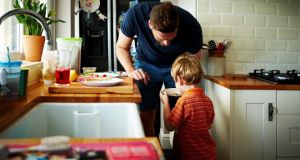 While the number of Irish parents staying at home has shrunk significantly over the past few decades, the proportion of fathers opting to do so has risen substantially.

They wash bottles, clean houses, cook dinners, pack lunches and ferry children to piano, soccer and ballet. And yet Irish people still underestimate how much it would cost to replace a stay-at-home parent.

Estimates from insurance group Royal London, however, say the cost is closer to about €42,000 a year, when all the activities for which a parent in the home is responsible are factored in.

“Royal London’s calculations revealed that the cost to employ someone to do the household jobs normally done by a stay-at-home parent would be at least €42,000 or more. This is over a third more than what the majority of the Irish public think it costs. Encouragingly, however, 29 per cent of respondents said they thought it would be €40,000 or higher,” said Joe Charles from Royal London.

For example, the average cost of a childminder is €9 an hour. One would pay €12 hour for a handyman/woman, €10 for a cook and €9 an hour for a cleaner.

The survey shows that men are more likely than women to put a lower value on the role of a house wife/husband, with some 24 per cent suggesting that the cost of this would be more than €40,000 a year, compared with 35 per cent of women.

Traditionally a role fulfilled by women, Central Statistics Office figures show that more and more men are giving up their suits for a life in the home.

In 1986, for example, some 653,398 women classed their economic status as “looking after home/family”, with just 445 men staying at home. Fast forward to 2011, however, the year of the most recent figures, and the number of women has shrunk by 48 per cent to 339,918, while the number of men minding the home has soared to 18,040. And it’s likely that this figure will continue to rise.