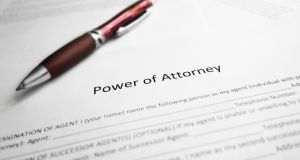 I read your article on enduring power of attorney. Back in 2013, one of my sisters asked me to be an attorney along with herself and another sister. I agreed “if my father was happy with it” and heard nothing more.

In 2015 I got a letter notifying me of a power of attorney he had taken out with the sister as attorney. My father’s signature on the notice was different than normal.

As time went on my sister started leaving me out of things about my father’s care. One day, she announced that it was time he went into a home. I said no but she said she was his attorney and he was moved to a home in October 2017.

At that stage, I got a solicitor of my own who found out that the power wasn’t registered in the ward of courts yet.

I later got a text to tell me to call to my father’s house as they were clearing it out to rent or sell under instructions from my sister.

My father’s solicitor is acting on behalf of my sister, the attorney, and my father. Is that not a conflict of interest?

I have a copy of the document with Part B to be completed by the donor appointing the attorneys. I am down on this as a notice party and so is another sister but it also says that this second sister is an attorney also. In your article you said you can only be one or the other. Is this true?.

Now, they are going to register the enduring power of attorney. Is that legal? My father has dementia but you could still have a conversation with him. Mr PD, email

Oh this is very sad – a family torn asunder by distrust over something as central as care for a parent.

The enduring power of attorney is a very useful tool for a person to ensure that their needs are provided for in line with what would be their wishes should a time come when they are no longer capable of caring for themselves by reason of mental incapacity.

Used properly, it can provide peace of mind both for the person granting the power and for the wider family.

But, while it is possible for the person granting the authority to limit the scope of the power of the attorney – for instance, to instruct that no decision can be made of selling the person’s home – powers under this provision can be very wide-ranging and much depends on the choice of the attorney and in the person being comfortable that any attorney will, in fact, act in their best interest and in line with their wishes.

In this case, there seems – at least on the surface – to be questions about how the original document of execution was drawn up, its validity, how the wishes of the subject of the power have been respected, and whether attorneys have acted beyond the power granted.

First and foremost, if the signature was not his, the original 2015 document executing the power is invalid.

The critical thing about signing over a power of attorney is that it must be done by a person acting voluntarily and with full awareness of their actions. That is why the execution document requires the counter-signature of both a lawyer – stating that the “donor” understands the effect of enduring power of attorney and that they were not acting under undue influence – and a doctor, asserting that, in their view, the person had the capacity to understand the process.

This is a legal document. If signatures were forged, then the whole enduring power of attorney is undermined.

Second, it is absolutely the case that you cannot be both one of the two notice parties and also an attorney. If this is so, the document is also invalid.

You have a short window in which to act

It could be that all siblings were notified in which case the minimum of two notice parties might have been met by notice given to you and the third sister who is not an attorney. You need to check this. Part B of the form to which you refer and of which you have a copy should clarify it as all attorneys and required notice parties must be listed.

Even where an enduring power of attorney is properly executed, there is no right to undertake powers granted – such as deciding that your father should go into a care home, never mind making a decision on selling his home – before the power is registered.

You say the listed attorney(s) are only now in 2019 looking to register the document. If so, they had absolutely no power under the document to determine in 2017 that he should enter residential care. Back then, the only power they could wield over their father was the power of persuasion as one of his children – with all of you having equal status and the decision entirely his to make.

Now once your sister does apply to the High Court for the power to be registered, she can make any personal care decisions provided for under the power but only where they cannot reasonably be deferred until the application is registered.

As the words indicate, this is a limited power – not a blank canvas to take any or all decisions – and certainly no protection for decision made before any application was ever made to the court.

On who acts for your father and for the attorney(s), I would argue that it is not good practice to have the same solicitor acting on behalf of both parties but I don’t think it is precluded by the Act.

What is certain is that, if your sister has applied to the court to register the power and you have reservations, you have a short window in which to act – just five weeks from the date of application.

This is likely your last chance to intervene. The attorney(s), your sister(s), must give formal notice to the notice parties of their intention to apply to have the power registered with the High Court. If that’s not done, or is not given in the right form (there is a set for of words that must be used, not just a random letter, email or text), I would be confident that the five-week notice period would be extended.

Objections must be in writing and should be sent to: Registrar of Wards of Court, Four Courts, Dublin 7. Any communication needs to include your name and address, your father’s name and address (I’d include the original one at the time the power was signed and also his current address) and the name and address of the attorney(s).

You’ll also need to state your relationship to the donor, ie, that you’re his son – and the grounds on which you are objecting to the power being registered.

Those grounds are limited. You can argue that the power is and was not valid for some of the reasons listed above, or that it is no longer valid even if it once was. You could argue that your father is not mentally incapable, though a diagnosis of dementia as in your father’s case, would make that challenging.

Finally, you could argue either that your sister(s) is/are unsuitable to be your father’s attorney or alternatively that fraud or undue pressure was used to induce him to create the enduring power in the first place. This last would, of course, be questioning the solicitor’s assessment at that time, making it a high hurdle to reach.

You certainly need to consult your own solicitor if you intend to contest this document and process. Having said that, I’m not very impressed that your lawyer previously found violations of the terms of the power and failed to advise you to act at that stage.

If your objections succeed, and given your father’s current state of health, it is likely that future decisions on his care would fall to the medical team caring for him and not to another family member.

While your sister may have sounded you out on the issue a few years before the power of attorney was executed, there was no obligation for your father to decide ultimately to choose you as an attorney overseeing his care.

That being said, the total silence on the issue once you responded with your caveat – that you would be happy to do so if that was what your father wanted – is not encouraging. By your own admission, you were not familiar with the power of attorney back in 2013. That’s not unusual. But you would expect any family considering this to explain clearly to all family members what it involved.

Correctly framed and respected, enduring power of attorney is a remarkably useful legal protection. Used as a blunt instrument within families, it can cause great distress.

1 How much state pension will I get next year?
2 PTSB plays down Ulster Bank talk as it sells €1.4bn of loans
3 Am I crazy to consider switching to an Ulster Bank mortgage?
4 Avolon appoints Paul Geaney as chief risk officer
5 Up or down – how much is your Local Property Tax this year?
6 Ghost newspapers and zombie brands are stalking the media
7 Housing crisis here to stay in absence of big rethink, industry warns
8 Irish tech company Asavie acquired by Nasdaq-listed Akamai
9 Brexit to curb services trade with UK, accountants group warns
10 How long can Government afford to keep State pension age at 66?
Real news has value SUBSCRIBE
Save money on international transfers