Cantillon: The pensions crisis the regulator dare not speak of 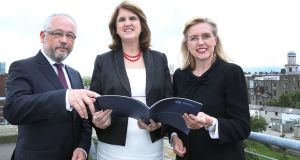 Search for it. You won’t find it. Not a single mention. The single most dramatic intervention in the Irish pensions debate in the past 12 months – the European Court of Justice ruling that the State had erred in not protecting the pension rights of former workers at Waterford Crystal – merits no coverage at all in the annual report of the regulator of the sector, the Pensions Board.

Nor can it be simply that the report, covering 2012, would be precluded from referring to more recent matters. It does find space to make reference to a decision by the Minister for Social Protection to change the structure of the regulator – an announcement made the same week as the ECJ ruling in April.

And it’s not that the regulator and Joan Burton, the responsible Minister, are blind to the importance of the issue. Questions on the topic were a central theme of the press conference at the report’s publication yesterday.

For successive governments, which have consistently resorted either to long-fingering policy pending a further report or contented themselves with curtailing incentives to pension savings or raising pension funds by way of a levy, the ECJ judgment was a sharp wake-up call, bringing into focus the State’s refusal to act when a similar case in the UK (to which it was a notice party) was decided by the ECJ back in 2007.

And it raises all sorts of issues. Ultimately, the UK ruling means that the State will have to make sure the 1,700 former workers at Waterford Crystal receive “not less than” 49 per cent of their entitlements. In fact, in that UK case, the final figure was closer to 90 per cent and that is what the Waterford Crystal workers will seek as the case returns to the Irish High Court for settlement.

There’s no money allocated to pay that and it seems likely a further levy on struggling defined benefit pension schemes will be required.

The irony, ultimately, is that the workers left high and dry by the collapse of Waterford Crystal could end up better off than those at companies like Independent Newspapers who, it was reported over the weekend, will get only 54 per cent of their entitlements on retirement due to a hole in the pension scheme at one of Ireland’s largest companies, even though the business will continue in operation.

These are the big issues for Irish pensions. It’s somewhat instructive, and not very reassuring, that the Pensions Board had nothing to say on them in its annual publication.