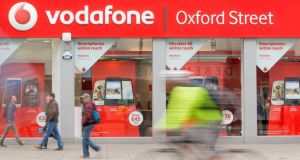 Vodafone: trades in sterling on the London Stock Exchange and on the Nasdaq exchange in the United States in dollars

I have been told that grandparents can give up to €30,000 to each grandchild without any capital acquisitions being incurred.

Also that we can separately give up to €3,000 per annum to each grandchild without any CAT being incurred or accumulated. I can find no support for these views. Kindly clarify. How do the donors make clear that the gifts are for the use of the grandchildren and not their parents?


Limits on what can pass under inheritance to particular relations, or non-relations, is an area we have covered before but the thresholds do change from budget to budget.

As of now, the threshold for gifts/inheritances to grandchildren is €30,150. The tax burden is on the recipient and it is up to them to be aware of when they exceed the relevant threshold. For instance, if you gift €20,000 to a grandchild and another grandparent or uncle/aunt gifts €16,000, they are over the relevant threshold and are liable for capital acquisitions tax as gifts/inheritances are aggregated within each category.

On top of all this, there is the “small gift exemption” to which you also refer. This means that any person can gift up to €3,000 to any other person each year without it being taken into account in assessing liability under the thresholds above.

So you could gift €3,000 a year to each grandchild regardless of what other people are gifting or leaving to those same children.

Both measures come under the capital acquisitions tax regime and full details are available on the Revenue website.

Having accepted that I have missed the deadline, what can I do next? I have 1,932 shares in Vodafone. I am confused as to which market they trade off.

Secondly, Vodafone appears to wish to expand into Europe over the next few years. Would it not be best to hold onto the shares to see how this expansion affects the share price? Did Verizon acquire Vodafone or vice versa?

Should I sell my Verizon shares? What market do they trade on? Finally, is the Vodafone dividend rate 3.53%?

These may seem like basic questions but multiple online searches have given multiple answers. I would like to gain as much as I can from my shares now, having missed the boat on this deal. In fact, how much have I missed out on given my holding of 1,932 shares ... do I want to know?


Vodafone trades in sterling on the London Stock Exchange. It also trades on the Nasdaq exchange in the United States in dollars. For your purposes, you will be trading in London and will have to take the euro/sterling exchange rate into consideration.

In terms of who bought who, the business was a joint venture between Vodafone and Verizon. The “windfall” arises from the money Vodafone received when it agreed to an offer from Verizon to buy it out of the business.

Verizon trades on the New York Stock Exchange and, with your Vodafone holding, you should now own 49 Verizon shares.

Should you sell? That’s very much a personal choice. Certainly selling through the current Computershare offer will cost less than would otherwise be the case. If you hold nothing but Vodafone and Verizon stock, you will be very concentrated in similar sectors, which is not generally advised. Having said that, it is very much your call and you should look at the company before making your mind up. There is lots of talk of Verizon, AT&T, and others expanding into Europe but, for now, it is just talk. However, as markets mature, the big telecoms and communications businesses will have to look further afield for sales and earnings growth. What’ll it do for the share price: that depends on whether investors thin at the time that it is a good idea.

You’re right. You probably don’t want to know how much you missed out on ... it will be between 24 and 55 per cent of the c€1.24 a share payout, depending on your circumstances – ranging from whether you are a pensioner over 70 on the basic rate of tax to, at the other extreme, a self-employed person on the higher rate.

Following last week’s query on whether the taxman would pursue money spent on a daughter’s wedding or given to meet some of those expenses, Andrew Fahy of Investec Wealth & Investment suggests that the answer lies in Section 82 of the catchily titled Capital Acquisitions Tax Consolidation Act 2003 which states that: “The following are not gifts or inheritances...

He argues that this, essentially “catch all” provision, can cover a parent paying for his/her child’s wedding.

“One could also argue that the €3,000 ‘small gift exemption’ is relevant because paying for a wedding actually bestows a small benefit to each wedding guest rather than one large benefit to the bride or groom,” he notes, an intriguing, if somewhat unintended, use of the small gift exemption.

Please send your queries to Dominic Coyle, Q&A, The Irish Times, 24-28 Tara St reet, D ublin 2, or e mail to dcoyle@irishtimes.ie. This column is a reader service and is not intended to replace professional advice.