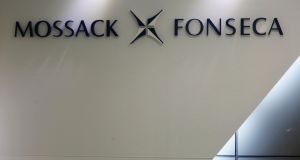 Mossack Fonseca tweeted that it would “be ceasing operations” in those territories, “but we will continue serving all of our clients,” it said in a tweet. Photograph: Bobby Yip/Reuters

The law firm at the heart of the Panama Papers revelations has decided to close its offices in the British-dependent territories of Jersey, Isle of Man and Gibraltar.

Mossack Fonseca “will be ceasing operations” in those territories, “but we will continue serving all of our clients,” it said in a tweet.

“This decision has been taken with great regret, as Mossack Fonseca has had a presence in these locations for more than 20 years,” the Panama-based law firm added.

The office closures were part of a strategy to “consolidate our service office network,” it said.

They revealed that many prominent leaders, politicians, celebrities and wealthy individuals around the world used Mossack Fonseca to start up or run offshore entities to hold their assets.

Although offshore companies are not in themselves illegal, the sudden publication of the information drew attention to possible tax avoidance and money laundering crimes in some cases, and embarrassed some figures trying to keep their finances secret.

News of the closure of Mossack Fonseca’s offices in Jersey and Isle of Man - two Crown dependencies of Britain - and Gibraltar - a British overseas territory jutting off from Spain - was reported earlier this week by local media in those territories and the BBC.

The law firm in Panama did not confirm the information on Thursday when contacted by AFP.

While its tweets on Friday said those closures were happening, they made no mention of another report circulating this week in US media, about Mossack Fonseca’s affiliate in the state of Nevada resigning as the agent for 1,000 companies it administered there.