Offers in region of €1bn expected for Blanchardstown Centre 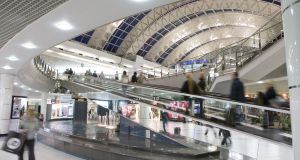 Green Property has called for final bids tomorrow for the Blanchardstown Centre, its crown jewel asset, with three contenders remaining in the race for a business that is expected to fetch in the region of €1 billion.

Developer Joe O’Reilly’s Chartered Land, backed by capital from Morgan Stanley, US investment group Blackstone and Canada Pension Plan Investment Board are final bidders for the centre, where Dunnes Stores, Penneys, Debenhams and Marks & Spencer are the anchor tenants.

A further 250,000sq ft is made up of offices, a cinema, theatre, apartments and a Crowne Plaza hotel.

Spokesmen for Green Property, Blackstone and CPPIB declined to comment, while Mr O’Reilly didn’t respond to requests for comment.

Green Property, where Stephen Vernon is chairman, hired Jones Lang LaSalle and Eastdil in January as joint agents for the centre. The third sale of a major Dublin shopping centre in less than a year comes as retail sales continue to recover from the economic crisis.

Retail sales rose 11 per cent in February compared to the same period last year, according to the Central Statistics Office, albeit driven by car purchases.

The National Asset Management Agency (Nama) sold loans linked to the Dundrum Town Centre and a 50 per cent stake in the Pavilions shopping centre in Swords last year to the UK’s biggest retail landlord Hammerson and German insurer Allianz. They comprised the main parts of a loan portfolio, called Project Jewel, which the so-called bad bank agreed to sell in September for €1.85 billion.

While the underlying properties in the Jewel portfolio are owned by Mr O’Reilly’s Chartered Land, Hammerson has said that its main aim is to acquire ownership of the actual assets in a “consensual agreement.” It is understood that talks on the matter are ongoing. The Blanchardstown Centre generates a rent roll of almost €50 million a year, with annual footfall of 16 million people, some two million fewer than Dundrum. Tenant occupancy is 97 per cent.

There is scope for development of a further 1.6 million sq ft of retail, office, leisure facilities and apartments under a master development plan for the site.

Planning consent for a 272,000sq ft extension to the main centre and underground car parking has already been granted.

It is understood that Mr Vernon owns over 60 per cent of the company behind the centre, with fellow directors Jim McKenna, Mark Munro and Paul Culhane also major shareholders.

1 Ireland stands to benefit in a big way from investing in public transport
2 ‘The recovery needs to be a full-scale economic renewal’
3 Ryanair expects air fares to fall when flights take off again
4 Minister calls on EU to act against tobacco firms ‘undermining’ menthol ban in Ireland
5 Small businesses are cannon fodder in zealous anti-virus experiment
6 Household savings soar as consumers stop spending
7 Tobacco makers still trying to make a mint from Irish menthol market
8 Michael Smurfit: ‘I asked Trump to invite me to the White House for my 80th birthday’
9 Joint accounts: if one of us dies, can the other access the money?
10 Tax and the Pandemic Unemployment Payment: Your questions answered
Real news has value SUBSCRIBE