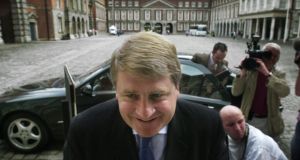 The recent assertion of media power by a person found to have paid large sums of money to a government minister who improperly assisted him to acquire the hugely lucrative second mobile phone licence has been largely ignored. It is as though we do not want to acknowledge an uncomfortable truth, while members of the present government can hardly wait to pay homage to this same person.

The person I am referring to is of course Denis O’Brien and it was his financial clout, founded on the grant to his company of that mobile phone licence, which, at least indirectly, persuaded Pat Kenny to leave RTÉ and join Newstalk.

I have argued in these columns and in correspondence with Denis O’Brien (to whom, incidentally, I am indebted for bringing me into broadcasting) that no one person should be allowed to control a media group the size of Independent News and Media (INM) in a society as small as Ireland – Denis O’Brien insists he does not control INM – and certainly not, when, in this instance, that person also controls an appreciable segment of the radio market.

There is also the fact that Denis O’Brien’s record as a media owner is one which alone should disbar him from exercising such power. He has himself written that media proprietors should operate “at an appropriate distance from editorial matters” and of “the responsibility that rests with media owners not to interfere with editorial content”.

His repeated efforts to have Sam Smyth stopped from reporting and commenting on the Moriarty tribunal during which time he, Denis O’Brien, was the central character, is one instance of that record.

More recently, there is apprehension that the restructuring of INM’s editorial operations in Ireland may enable Denis O’Brien to acquire firm editorial control. Does this editorial restructuring fit with proprietors operating “at an appropriate distance from editorial matters”?

But the chief reason why this person must be stopped from exerting such media muscle relates to the findings of a tribunal, the Moriarty tribunal, established by the Oireachtas and supervised by the courts under the Constitution.

It is the findings concerning the scale of the elaborate deception and lying in which Denis O’Brien and his associates engaged – the tribunal did not actually state that Denis O’Brien lied, but it rejected almost every piece of evidence he gave to the tribunal under oath, which surely is the same thing.

The tribunal found that a payment of €172,000 (£147,000) was made by Denis O’Brien to Michel Lowry through two intermediaries during a period when Michael Lowry held public office (paragraph 16.62).

It found that Michael Lowry had purchased a property in Mansfield, England, largely with funds from an account of Denis O’Brien in Crédit Suisse First Boston in London (16.78)

It found that Michael Lowry had bought a property in Cheadle, England, largely funded from that same London account of Denis O’Brien (16.89).

It found that Michael Lowry had secured a loan from Woodchester bank of £420,000 on the basis of an understanding that Denis O’Brien was backing the loan (16.89).

It found that the files in the office of a London solicitor, Christopher Vaughan, were falsified “to obscure from the Tribunal a clear connection between Mr Denis O’Brien and Mr Michael Lowry and the payments by the former to the latter” (16.97).

There is a further extraordinary finding. It reads: “The Tribunal has further concluded that the payment of Stg£150,000 to Mr Kevin Phelan by Mr Denis O’Brien, through Westferry [a company owned by Denis O’Brien] was primarily intended to ensure that Mr Kevin Phelan would not further undermine the false version of Mr Lowry’s involvement in the UK properties already tendered in evidence to the Tribunal in 2001 and the false explanation already presented, with the complicity of Mr Kevin Phelan, for the existence and provision to the Tribunal of the falsified ‘short form’ correspondence [this relates to the solici- tor’s files which were falsified]” (16.126).

The report also finds that Michael Lowry went to considerable effort to assist Denis O’Brien in securing the mobile phone licence, in disclosing to him confidential information concerning the criteria that would apply to evaluating applications for the licence and in advising him to bring Dermot Desmond on board to secure the financial status of Denis O’Brien’s company.

This latter advice resulted in Denis O’Brien’s company improperly contacting the evaluating committee with additional information after the deadline of this had expired.

What the tribunal reveals is sordid. While Denis O’Brien has consistently rejected the findings, the weight of evidence in the report is persuasive.

Denis O’Brien’s media power demands it be confronted persistently by the evidence in the Moriarty tribunal report, threats to sue journalists personally notwithstanding.