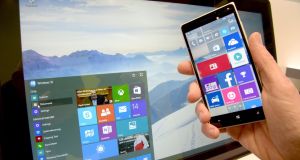 Windows 10 for smartphones: why did Microsoft’s mobile efforts flub so badly, and why did it take so long to correct course once the underlying currents of the smartphone era became evident? Photograph: EPA/PETER STEFFEN

Last week, Microsoft put the torch to the pyre of its mobile ambitions, laying off 1,850 jobs and writing down $950 million from its Lumia smartphone business. The move effectively closed down the final remains of its ill-fated Nokia acquisition little more than two years after buying the Finnish company for $7.2 billion. Last year, the Seattle giant wrote down that value and then some, as well as cutting 7,800 jobs from its phone division. The ultimate cost, once all the writedowns are taken into account, was probably north of $10 billion.

It’s a very sad state of affairs, and all so predictable – there was no shortage of pundits and analysts who thought the Nokia acquisition, announced in late 2013, was the final folly of then chief executive Steve Ballmer, who had announced his retirement just a week before.

At that stage, it was already abundantly clear that Apple, Google and Samsung had carved up the profits and market share in the smartphone business, with no space left for the mobile Windows offering. Saddling his successor with a smartphone business that no one thought could work seemed like the height of Ballmerism, and that scepticism was swiftly proven correct – and can be counted in thousands of lost jobs, most of them in Finland.

Since Satya Nadella has taken the reigns, Microsoft has taken a different tack, playing to its abundant strengths and focusing on enterprise and the cloud. Last week’s move confirmed that shift in focus – it might be irrelevant in the mobile sphere, but it is still a massively profitable and innovative company thanks to Nadella’s deft management.

But the question remains: how did Microsoft go from being the all-conquering giant of the computing industry to an irrelevancy in the mobile era? Why did its mobile efforts flub so badly, and why did it take so long to correct course once the underlying currents of the smartphone era became evident?

And Microsoft wasn’t alone – both Nokia itself and RIM with its Blackberry were similarly blindsided by the swift change to the smartphone industry represented by the iPhone and subsequently Android.

The answers to how all three missed the mobile boat despite having a headstart are complex and multifaceted, involving a degree of institutional arrogance and a classic case of the innovator’s dilemma.

But understanding what happened is critical to understanding how today’s leading technology companies might become unstuck. And there is an increasing feeling that we are beginning to witness a similar shift in computing paradigms, and that a similar fate might be about to befall Apple, with artificial intelligence taking the place of mobile as the agent of change.

“Today, Amazon, Facebook, and Google are placing large bets on advanced AI, ubiquitous assistants, and voice interfaces, hoping that these will become the next thing that our devices are for. If they’re right – and that’s a big ‘if’ – I’m worried for Apple. Today, Apple’s being led properly day-to-day and doing very well overall. But if the landscape shifts to prioritise those big-data AI services, Apple will find itself in a similar position as BlackBerry did almost a decade ago: what they’re able to do, despite being very good at it, won’t be enough anymore, and they won’t be able to catch up.”

Needless to say, Arment’s piece kicked off a heated debate about the Cupertino giant’s aptitude in AI and services in general. Concerns about the mixed success of services, with Apple Music and Apple Maps coming in for particular criticism, are just the latest verse to be added to the chorus of complaints about Apple’s declining software quality and reliability.

Above all, while Apple’s voice recognition assistant Siri has been around since 2011, it hasn’t really grown beyond an impressive gimmick. Google, on the other hand, is putting all its technological genius into artificial intelligence and machine-learning technology, with chief executive Sundar Pichai demonstrating just how impressive Google’s efforts are at the company’s recent I/O conference.

Somewhat surprisingly, Amazon has also stolen a lead in this space, with the Amazon Echo, a voice-controlled speaker and domestic assistant that can operate with a range of services, proving a big hit with users.

Perhaps as a response to this debate, there were a few judicious leaks about potential announcements at Apple’s Worldwide Developer Conference on June 13th, such as finally opening up Siri to operate with other services, and also news of a voice-controlled wifi-connected speaker to rival the Echo.

However, will this prove to be too little, too late? Analyst Ben Thompson wrote a piece further exploring the themes, pointing out that culturally, Apple is a hardware company first and foremost, with a corporate structure built around creating devices, and all the institutional assumptions that underpin that.

“The job of a leader is to identify and question these assumptions; companies can and do change,” wrote Thompson. “But they rarely change when they’re on top: it’s not only that the financial results speak for themselves … but that the most obvious strategy is always to leverage what you have.”

Certainly, Tim Cook is no Steve Ballmer, and intelligent assistants may not represent the next big paradigm shift. But these are exactly the sort of technological evolutions that sees today’s giants become tomorrow’s dinosaurs.