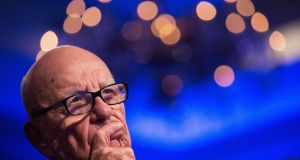 Rupert Murdoch’s News Corp has declared its bid to take over Wireless Group has received backing from over 92 per cent of shareholders.

Rupert Murdoch’s News Corp has declared its bid to take over Wireless Group has received backing from over 92 per cent of shareholders in the company behind the former UTV radio stations.

The all-cash offer, announced in June and valuing Wireless at £220 million (€255 million), will stay open to remaining shareholders until further notice, the two companies said in a joint statement on Thursday. News Corp declared the offer unconditional as to acceptances.

“Shareholders are strongly recommended to accept the offer as the cancellation of listing would significantly reduce the liquidity and marketability of any Wireless shares not acquired by News Corp (UK & Ireland),” they said.

The acquisition will see Wireless Group’s biggest asset, London-based radio station TalkSport, and seven Irish radio stations come under the control of News Corp (UK and Ireland), which also owns the Sun, the Times and the Sunday Times newspapers, as well as the Dublin-based news agency Storyful.

In the Republic, it owns FM104 and Q102 in Dublin, LMFM in Louth and Meath, Cork’s 96FM and C103, and Live95FM in Limerick. It also owns U105.8FM in Belfast and operates an advertising sales house in Dublin.

Wireless is the company left behind when UTV Media sold its television assets and the name UTV to ITV in 2015 for £100 million. ITV has since sold on the Dublin-based channel UTV Ireland to TV3-owner Virgin Media for €10 million.

Rebekah Brooks, the chief executive of News UK (the company’s trading name), said in June that Wireless represented “an opportunity for us to take advantage of its strong radio presence to build on our growing digital success story”.

Both News Corp’s acquisition of Wireless Group and Virgin Media’s purchase of UTV Ireland have to be cleared by competition regulators.

Under Ireland’s media mergers legislation, the deals will also be examined on plurality grounds by the Broadcasting Authority of Ireland and Minister for Communications Denis Naughten.