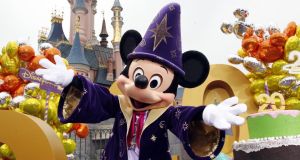 Revenue at Disney’s theme park and resorts business was up 6 per cent to $4.38 billion.

Walt Disney’s quarterly profit and revenue on Tuesday beat analysts’ estimates fuelled by movie studio hits, and the media company said it was taking a stake in a streaming video technology company to sell more content directly to consumers.

Disney and other media companies are struggling with “cord-cutting” consumers who abandon large bundles of channels sold by cable TV providers. In buying a 33 per cent stake in video-streaming firm BAMTech for $1 billion, Disney is hoping to lure online viewers. It will begin with an ESPN subscription streaming service by year’s end.

The service will not, however, include any of the content that appears on ESPN’s TV networks, Disney said.

Disney has the option to acquire majority ownership in coming years in BAMTech, which was formed by Major League Baseball (MLB) and is separate from the league’s content business. The technology is lauded as some of the best in the industry and is used by HBO Now and the National Hockey League as well as baseball.

“That said, I think it doesn’t do anything specifically to allay fears of unbundling” of cable networks,” he said.

“Our goal is to ensure that our brands, notably ESPN, remain strong, vital and relevant in a totally changed media landscape,” Iger said of the investment.

For the June quarter, Disney’s movie and theme parks divisions topped expectations, although a rise in cable networks revenue and operating profit was slightly below Wall Street targets, according to FactSet Street Account.

Shares of Disney fell about 2 per cent in extended trade.

Revenue at Disney’s cable networks business rose 1.4 per cent to $4.2 billion (€3.75 billion) in the third quarter ended on July 2nd, but missed an analyst consensus of $4.31 billion.

ESPN – the company’s cash cow – drove the increase in cable networks operating income due to affiliate and advertising revenue growth, although the number of subscribers fell and programming costs rose.

The Jungle Book and Captain America: Civil War fuelled gains at the movie studio, with revenue increasing 39.6 per cent to $2.85 billion. Operating income rose 62 per cent to $766 million.

Revenue at its theme park and resorts business was up 6 per cent to $4.38 billion.

Analysts on average had expected a profit of $1.61 per share and revenue of $14.15 billion.