Turning the airwaves blue for cancer 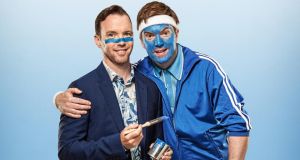 If you’re a woman and are only vaguely aware that this is Blue September, then the targeting of the new, month-long cancer awareness campaign is working.

It’s aimed at men and it’s part of an international campaign – supported here by VHI Healthcare – that seeks to tackle the fact that men are more likely to develop and die of cancer than women, and that men are less likely to discuss their personal health concerns with family, friends or their GP.

Comedians Dermot Whelan and Bernard O’Shea are the (blue) faces of the campaign – the target audience is primarily young men from their early 20s – and they feature in series of sketches that first appeared on YouTube, Twitter and Facebook and other digital channels over the weekend as a teaser start to the campaign which is now being complemented by radio, TV and in cinema.

Fundraising element
“Constant, daily messaging on digital will be a feature throughout the month to the target audience,” says Tony Boylan, marketing communications manager at VHI, “and the tone is comedic because that encourages increased engagement.”

The health insurer’s agencies, Mindshare and Publicis, developed the Dare to go Blue campaign for Blue September and the sponsorship commitment by VHI is for three years.

As well as raising awareness the campaign has a fundraising element for The Mater Foundation Dublin, Mercy Hospital Cancer Appeal and Cancer Care West. The idea is sponsored blue-related dares: dare a fanatic Clare supporter to wear a blue jersey to the GAA football final in Croke Park, that sort of thing.

The message of cancer awareness for men has lagged behind the massive global success of the pink ribbon campaign for women, although a second male-focused campaign, the now-well established Movember, begins just a month after Blue September finishes.

The timing doesn’t bother Boylan. “It’s never too cluttered a space for awareness messaging,” he says.