Procter & Gamble was the top television advertiser in 2014, ahead of Sky and Unilever 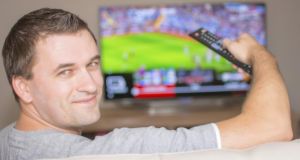 The nation’s fondness for watching television continued unabated in 2014, with figures compiled by Nielsen for industry ratings body Tam Ireland suggesting Irish adults aged 15 or older watched the small screen for an average of three hours and 28 minutes each day.

This figure is unchanged on 2013. Some 90 per cent (three hours and nine minutes) of this viewing time was spent watching live (linear) television channels, while the remainder (19 minutes) was time-shifted – in other words, programmes that were recorded and watched later.

The figure of three hours and 28 minutes does not include time spent watching DVDs, online catch-up players or so-called “over-the-top” services such as Netflix.

Lidl Ireland, L’Oréal, Aldi, UPC and McDonald’s completed the top 10. Three of the companies that featured in the 2013 top 10 dropped out of it last year: Kellogg’s, Eircom and the Road Safety Authority.