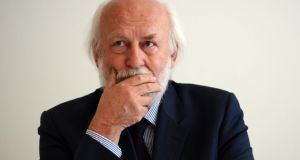 Prof John Horgan at the launch of the Press Council of Ireland Office of the Press Ombudsman annual report. Photograph: Eric Luke

TheJournal.ie’s application for membership to the Press Council of Ireland is “well underway” and will be processed soon, says the Press Ombudsman, Prof John Horgan.

The online publication’s owner Distilled Media first enquired about joining the regulatory system two years ago in a move that would give the company some legal benefits in the event of a libel action under the Defamation Act.

Speaking at the launch of the Press Council and Office of the Press Ombudsman annual report on Monday, Prof Horgan said the delay had been caused by the fact the press regulation body did not have any formal criteria for assessing new membership applications.

‘Unacceptable risks’
Meanwhile, the Press Council has submitted a response to a recent European Union report on media freedom and plurality. Published in January, the High Level Group report ruffled feathers by calling for Brussels to have greater powers to oversee national press councils to ensure they “comply with European values”.

Some of the report’s recommendations “pose unacceptable risks” to the principle of a free press, the Press Council says. Its message is: Ireland is not Hungary (where media freedom has come under sustained pressure from the state).

“What might constitute enlightened media supervision in one place might well be construed as unacceptable interference elsewhere,” the Press Council concludes.

Proposed enforcement powers, including fines and even the power to remove journalistic status, “would be viewed as imposing an unnecessarily heavy regulatory hand”, it warns.

1 Irish company to test vaccines on volunteers deliberately infected with Covid-19
2 The wealth of the Irish – how do your assets match up?
3 Dunnes Stores set to enter grocery delivery market
4 Air travel never going ‘back to way it was’
5 Willie Walsh joins CarTrawler as deputy chairman
6 KBC Ireland fined €18.3m for ‘unconscionable’ tracker scandal role
7 Eir takes on extra staff as ComReg chases it on complaints
8 Should I switch bank now with Ulster Bank at risk of closing?
9 How to upgrade your home entertainment system for less
10 Dublin and Cork airports look at setting up pre-flight Covid testing centres
Real news has value SUBSCRIBE