The ooh and the aww of this year’s Christmas ads

Advertisers want us to marvel at their fairy dust, but it’s gold-dust ideas that win

John Lewis has partnered with Age UK for its Christmas ad - fondly regarded as the pinnacle of festive retail - with a reminder to consumers to consider those who will be alone this year. 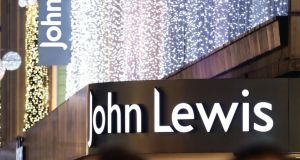 John Lewis department stores operate a well-worn formula for this year’s Christmas ad, but there’s nothing cheap about it and certainly nothing gaudy. It is, in fact, just marvellous. Photograph: Yui Mok/PA

Christmas is amazing. It’s a full-time marvel. Look at all those angels with bulbs up their gowns! That bristling carpet of fake snow! Cheerful reindeer dangle from carousels made of red-and-white candy canes and mechanical window displays are fuelled only by amaretto and port. It’s magical.

Wait, are those lights meant to flicker like that? You don’t have to be trapped in a department store – too blinded to set a course for the exit – to have spotted that Christmas has been subject to aesthetic inflation over the past decade, or over the 12 years since Love Actually, to be more precise.

As the song from that film had it, Christmas is All Around. This is now expected. But it means TV advertisements that appeal to our sense of wonder and awe have their work cut out, like fireworks after the first minute.

Among this year’s lot to give it a jolly good try is Boots, which sells toiletries and vitamins from clinically white outlets that you need both elbows to get around. But in its Discover More ad, Boots appears to be in the business of running Hollywood-style gift and pampering emporiums from gated city mansions with frosted roofs.

A blue firefly transports a young girl on an enchanted trip through the razzle-dazzle. There are pack shots, but even more wide shots. Wow, etc.

Marks & Spencer’s The Art of Christmas ad, meanwhile, opens on a young boy with his mouth falling open in amazement. To the strains of a festive flute, he scampers towards giant trees made of strip lighting.

So far, so standard. Only then the glass star shatters, the gaping ceases and the scene makes way for a stompy M&S fashion show soundtracked by Uptown Funk, that song from 2014 that everyone has moved on from.

It’s easy to see what Marks & Spencer was going for here: a frantic, unsentimental “party” Christmas vibe with not a trace of whimsy. But for defiance of the twinkling, tinkling norm, it is outdone by House of Fraser’s Your Christmas Your Rules ad, which at one point depicts a dining table of over-dressed adults eccentrically banging knives and forks to a hip-hop beat.

Elsewhere, the John Lewis Christmas advertising handbook has been well-thumbed. Pensive children with love to give (Vodafone) and fragile, ethereal singers (SuperValu) are still in vogue. Three generations of family are ideal and a stuffed toy lead (Ballymena Business Improvement District) won’t do any harm.

To make a Christmas ad, three things are essential: a script with the words “magic” or “magical” crammed in, a suite of wrapping-paper sound effects and an ability to persuade a child actor to look up.

Play it safe by ending with the Northern lights (Eir) or Myleene Klass laying into a grand piano in a snowy clearing (Littlewoods) or any kind of mise-en-scène that cannot be recreated by your neighbour with an eight-pack of batteries.

Still, it’s impossible not to feel that, rather than sprinkling their ads with fairy dust visual effects, advertisers would stand a better chance of “winning” Christmas in the eyes of jaded viewers if they had a gold-dust idea.

Sainsbury’s has this year pulled out the big guns in the form of author Judith Kerr and her feline creation Mog, who ticks both the cute animal box and the parental nostalgia one. Mog’s Christmas Calamity is the screwball tale of a CGI cat who starts a house fire, forcing her owners to spend Christmas with the neighbours. The hashtag is #ChristmasIsForSharing, but clearly, as the ad shows, that’s only true in emergencies.

Back in the “aww, sniff” department, John Lewis has been playing a high-level game for so long now that its ad launches have gone through the stage of being ridiculously overhyped by the UK media and have reached the weary, “oh, it’s that time of the year again” phase of the PR cycle, parodies included.

That’s a shame, as its latest ad, Man on the Moon is one of its best. It eschews penguins, bears and hares in favour of a little girl with a telescope who makes contact with a lonely, pyjama-wearing old man who has been knocking about by himself on a bench by the Sea of Tranquility. It’s no way to spend Christmas.

At the heart of this partnership with charity Age UK, a double message seamlessly merges: don’t forget about older people at Christmas time and, oh yes, people who care can find special gifts for their loved ones at John Lewis. Both points revolve around the common theme of thoughtfulness that the retailer has claimed as its own.

By now it’s a familiar formula, but there’s nothing cheap about it and certainly nothing gaudy. It is, in fact, just marvellous.