The Iftas bid to avoid another car crash

After last year’s fiasco, the Irish film and TV industry is back to nervously applaud itself 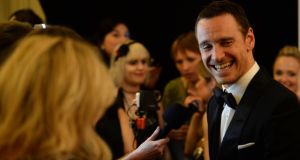 The Iftas, aka the Irish Film and Television Academy awards, generated a heap of chatter last year and not only in the hotel function room where it was being staged. Who knew so many people cared? The ceremony, unlike some of the winning speeches, was certainly memorable, and it was just a shame that if it was to receive an award it would be for Best Live TV Car Crash.

Bizarrely, the first instinct of some was to blame the guests who talked through the tedium, rather than the organisers, producers and broadcasters who presented a torturously overlong show with almost total sound failure.

But ssshhhh! Let’s not rehash bad times. The Iftas are back - sort of - and while the event will never boast the slickness, dazzle and humour of the weekend’s big entertainment extravaganza – that’s the 60th annual Eurovision Song Contest final, not Referendum 2015 – a little modesty may actually suit it.

The broadcaster, the venue, the host and the volume of awards being doled out have all changed. This Sunday’s slimmed-down event is, more precisely, the Ifta Film & Drama Awards, with all non-drama TV gongs spun off into a separate ceremony that won’t take place until October – plenty of time for current affairs nominees to rent that tux.

Presenter-turned-actor Caroline Morahan will be your host, which on paper seems like a solid choice. Morahan, no stranger to theatre, would surely be able to carry off a live broadcast, but as a consequence of last year’s debacle, the show will not be going out live, or even with the kind of time-delay the BBC applies to the Baftas.

Instead, an Ifta special will be shown on TV3 eight days later on June 1st, for the benefit of bank holiday couch-slumpers who have long known the winners.

No microphones were necessary to pick up the prickliness between Ifta and RTÉ as the fallout from last year’s shambles spread from social media to newspaper front pages, which is why it is TV3 that is stepping in with a one-hour show likely to cut out speeches by a) documentary types, b) technical winners and c) politicians.

But it has promised – or warned, depending on your tolerance level for the Irish celebrity scene – that it will be making the most of the red carpet angle this Monday via coverage on showbiz stalwart Xposé and the Taoiseach’s favourite breakfast show, Ireland AM. This is the stuff TV3 – motto “We Entertain” – instinctively, unashamedly enjoys and anyone with an allergic reaction to it can always keep their remotes glued to RTÉ One.

Like another show on next Monday’s schedules (UTV Ireland’s Pat Kenny in the Round), the Iftas will be filmed in the Round Room of Dublin’s Mansion House, a venue that, according to its website, comes with a “starry sky effect” ceiling included. Pat Kenny in the Round maker Coco Television has worked out how to make the venue seem at once cosy and capable of amplifying any electric moments, and there’s no reason why the producers of the Iftas can’t do the same.

Theirs is the more complex task, of course. The Iftas should, ideally, convey a sense that the people in the room are artists whose work is special, not mere CV padding that only got made because the grants fell into place.

Any awards show is only ever as good as its nominations and this year the Ifta nods are the usual mix of productions that can be said to be Irish, productions that were filmed or part-filmed in Ireland and performances by Irish actors in productions that otherwise have no connection to the industry here.

Putting RTÉ’s Love/Hate up against HBO’s Game of Thrones (which has more than 10 times the budget per episode) isn’t comparing like with like, but that’s beside the point, as the whole idea is to lure some Westeros regulars to Dublin for the photo-call. After all, some of the biggest film nominees may be otherwise engaged in Cannes.

The gleeful hoo-ha over last year’s Iftas disaster obscured the fact that its recent predecessors were dreadful, too, with the 2012 event memorably leaving Brenda Fricker “cringing” in her seat.

In an ideal scenario for Ifta, the headlines next week will stick to who won, who lost and who made controversial speeches, and somewhere along the way, there will be a net gain for the industry. The point of these shindigs, lest anyone forget, is marketing. Look at us, we’re talented. See, we funded this talent.

Still, I’m already outraged by one shocking omission from the list: no make-up and hair nomination for RTÉ’s Charlie. That brave recreation of Fianna Fáil’s finest comb-overs deserved recognition – an Ifta at the very least.