Shaky scoops from the scene 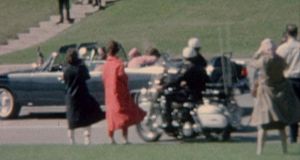 Footage of John F Kennedy’s assassination in 1963 would become the most famous home-movie in history. Photograph: AP Photo

In November 1963, Abraham Zapruder, a Dallas clothing manufacturer, took his top-of-the-line Bell & Howell Zoomatic camera to the Dealey Plaza and stood on a concrete pedestal as John Kennedy’s limousine turned onto Elm Street. His 26.6 second footage of what happened next was later labelled the most famous home-movie in history.

User-generated content, or UGC, may have become popular newsroom jargon only in the past decade, but the phenomenon itself is not new. What is new is its prevalence. Like the TV vox pop half a century before it, its status has leapt from revolutionary novelty, mistrusted by some, to part of the acceptable, if not always welcome, grammar of reporting.

But according to a new study by Columbia Journalism School’s Tow Center for Digital Journalism, most news organisations are doing UGC wrong.

The authors of the report analysed the user-generated videos and photographs in 1,164 hours of television news broadcast by cross-border outlets such as BBC World, Al Jazeera and France 24, and studied 2,254 related web pages. They also interviewed 64 editors, managers and journalists from 38 news organisations.

The first time the BBC led a bulletin with UGC imagery was in July 2005, when it used pictures captured by Tube travellers escaping the scene of the London bombings. Discussions took place about whether viewers would tolerate shaky footage in place of the usual formal, authoritative camerawork. Today – because audiences equate unsteady images with authenticity – editors worry that camera-phone footage looks too slick.

Audiences like UGC, but they are not always told that is what they are watching. The Tow report frets about “troublesome practices” like sloppy labelling (“amateur video”), ultra-vague crediting (the meaningless “source: Twitter”), inefficient methods of seeking permissions, inconsistent payments and having-your-cake-and-disowning-it caveats (“this cannot be independently verified”).

At times, the global news organisations are depicted as so clueless about how they used UGC that the report reads like an advertisement for the services of social news agency Storyful, which is mentioned several times.

But a more pertinent question than how media outlets are using UGC is why they are using it. Ostensibly, it is because it produces stories “that otherwise would not, or could not, be told”. In the three-week period of the Tow study, 40 per cent of the UGC on its sample news channels related to Syria, a country so dangerous that few managers feel they can sign off on the requests of correspondents desperate to report its war. But Syria is an exception. The main reason reporters are not deployed overseas is not because of safety, but because of expense, and a drip-feed of UGC heightens the risk that on-the-ground reporting will dry up.

Much UGC is also used not because the stories could otherwise not be told at all, but because they otherwise couldn’t be told quite so instantaneously. “We can’t really afford to wait 30 minutes for a picture on the wire,” one journalist told the study. “If social media can give us a picture instantly, we will use it.”

The Tow report portrays editors who are cautious about UGC as establishment figures overcome with a self-preserving fear of the “democratisation” of news. In fact, it is almost impossible to separate journalists’ wariness of UGC from their wider discomfort with an acceleration in the news cycle, where speed takes precedence over accuracy and sensitivity, and where rush-to-judgment wins over a slow digestion of the complex.

There is an intensification process at work. While UGC helps newsdesks win the battle for a “20-second scoop”, it also creates new pressures to be first, and alters standards of reporting as it does so.

Last May, ITN paid a bystander to the murder of soldier Lee Rigby on the streets of Woolwich in London for mobile footage of one of the bloodied perpetrators. The report won ITN the UK’s Royal Television Society award for Scoop of the Year and it is held up in this study as a justification for dispatching senior producers to breaking news scenes to authorise payments for smartphone exclusives.

What the study doesn’t mention is that it made for a more graphic watch than would typically make teatime news bulletins, and that the coverage was the subject of more than 700 complaints from distressed viewers, many of whom argued that it shouldn’t have been shown, certainly not without more prominent warnings and especially not on a loop.

UGC may be shaping the news in ways that Zapruder could never imagine when he got his film developed by the Eastman Kodak Company on the day of the Kennedy assassination. But the term UGC is misleadingly simple, as editors – responsible editors – will always play a role.