Seen&Heard: Pay demands may rule out tax cuts in next budget 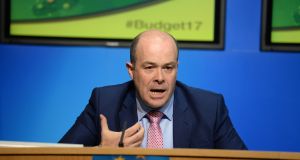 Minister for Communications Denis Naughten warns the Government will collapse if the agreement on public sector pay and pensions fails to hold, the ‘Sunday Independent’ reports. Photograph: Dara Mac Donaill

Public sector pay features on the front of the Sunday broadsheets. The Sunday Times reports unions are planning to make a series of individual pay claims, backed by the threat of industrial action, if the Government does not speed up talks on reversing pay and pension cuts imposed during the recession. The Sunday Business Post reports fear in government circles that demands for such pay rises will rule out any tax cuts in the next budget.

In the Sunday Independent, Minister for Communications Denis Naughten warns the Government will collapse if the agreement on public sector pay and pensions fails to hold. In a column in the same paper, economist Colm McCarthy estimates that if other public sector unions get the same pay increases as the gardaí, the cost to the State will be more than €1 billion.

Speaking on RTÉ’s The Week in Politics on Sunday, Minister for Health Simon Harris said Paschal Donohoe would be calling in key stakeholder unions to ascertain their views and make the Government’s views clear. Mr Harris also insisted the Government would stay within the Lansdowne Road agreement.

Kingspan chief executive Gene Murtagh has said Ireland should pull out of the EU if our corporation tax is threatened. In an interview with the Sunday Independent, the head of the global insulation maker said “our corporation tax rate is absolutely a red-line issue”.

Irish TV, the broadcaster focused on the diaspora, is in crunch talks to secure new funding, according to both the Sunday Times and Sunday Business Post. Both report that the TV station is seeking to restructure its shareholder base amid doubts that long-term backer John Griffin is no longer willing to continue to be the sole funder of the business.

Storyful to create 70 jobs in Dublin

Digital media firm Storyful is to create up to 70 new jobs in Dublin. The firm is due to announce a doubling of its staff, supported by IDA Ireland, the Sunday Times reports. It also writes that review website Yelp is to close its European headquarters in Dublin. It has hired about 80 staff to date and will begin a 30-day consultation with staff in the coming days.

In what it bills a “special investigation” the Sunday Business Post reports that drug companies are funding dozens of medical and nursing posts. It also claims that hospitals are unable to account for millions of euro that pharma firms say they paid the hospitals. It states more than €17 million was paid out last year, a sum that excludes the usual funding for R&D or clinical trials. It quotes Prof Michael Barry of the National Centre for Pharmaeconomics as saying he believes payments from industry are influencing prescribing habits in Ireland.

British chancellor Philip Hammond is considering scrapping low tax rates for staff who take advantage of company car schemes in the Autumn Statement. The Sunday Telegraph reports the change would force more than 300,000 taxpayers to pay thousands more for their company vehicle.

1 Fianna Fáil may have just pressed the pause button on the property market
2 UK to prioritise EU trade deal over one with United States
3 Who are Ireland’s 17 billionaires?
4 Saudi prince’s WhatsApp account ‘directly involved’ in Bezos hack
5 My father in a nursing home wants to gift me his house
6 Are there annual limits on inheritances or gifts to a child?
7 European investor acquires Harcourt Road offices for €55m
8 Dunnes premature in challenging Point Village resolution move, Supreme Court finds
9 Corporate tax change is inevitable, says Donohoe
10 Irish organisations struggle to comply fully with GDPR
Real news has value SUBSCRIBE