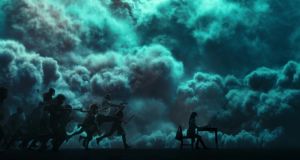 The RTÉ marketing campaign, which begins on Wednesday night, will seek to draw a clear distinction between the work of Irish reporters and ‘the noise out there’

RTÉ News is launching a “truth matters” marketing campaign today to highlight the critical role of Irish journalism amid an “infodemic” of Covid-19 misinformation.

The campaign, which debuts in the break of Wednesday night’s Six One bulletin, will seek to illustrate the value of accurately sourced news and draw a clear distinction between the work of Irish reporters and “the noise out there”, said RTÉ director of news and current affairs Jon Williams.

“I think the last six months have shown Irish journalism in a very good light,” he said. “As much as the infodemic has created noise and polarisation and fear, it has also driven demand for the exact opposite.”

The World Health Organisation (WHO) has warned that as well as trying to battle the pandemic, it is fighting an “infodemic” of misinformation, disinformation and rumours that have the potential to hamper the public health response to the virus and create confusion and distrust.

The script on the television advertisement will read: “Before you arrive at your opinion, do you know where your information is coming from? Not everything on your feed can be trusted. You need to move past the rage, deception and fear, and find the truth about the story.”

The campaign, which will also run across radio, print, social media and online, was devised by RTÉ’s in-house team, and produced by Dublin-based company Butter, with media-buying by the agency Vizeum.

While trust in RTÉ’s news output remains high overall (a recent Reuters Institute study found only 11 per cent say they do not trust it), Covid-denying protest groups have expressed hostility to the Irish media and carried anti-RTÉ signs.

“There will always be a constituency that doesn’t want to listen. There is no point trying to convert people who say black is white,” Mr Williams said.

On the whole, however, the Irish public is “far more astute” and “far better informed” than its counterparts in the UK, where Mr Williams is from, and the US, where he worked for ABC News before joining RTÉ in 2017. “You treat the audience with respect, and underestimate them at your peril.”

The 9pm news last Sunday night was watched by an average of 528,000 people, he noted, and the ratings for current affairs flagship programme Prime Time are 30 to 40 per cent higher year-on-year. Online news traffic has yet to sink below the general election high reached in February.

The pandemic has also led to unprecedented pooling of resources between RTÉ and its rival Virgin Media Television. To limit the numbers in the room, Virgin films briefings at the Department of Health, while RTÉ films briefings at Government Buildings.

“I salute my friend [Virgin head of news and sport] Mick McCaffrey for being open to that,” said Mr Williams.

He described himself as “a lucky general” for “inheriting” the experience of RTÉ journalists including its health correspondent. “Directors of news and current affairs come and go, but there’s only one Fergal Bowers.”