‘Red Rock’ soap showdowns do the trick for TV3

Viewer ratings may have dropped since its debut, but make no mistake: this show is great value 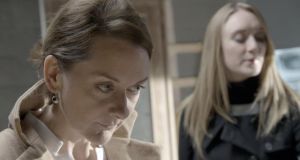 Soap operas are a team game, but when it comes to TV3’s new soap opera Red Rock, a special shout-out must go to the wardrobe person responsible for casting the unsung star of the show: Patricia Hennessy’s camel coat.

Patricia (Cathy Belton), one of Red Rock’s principal baddies, enters half her scenes wearing a fiendishly upturned collar that shields her from direct contact with human emotions. The coat forms an ensemble of evil with slicked back hair (also inspired) and the iciest of icy smiles, actor’s own.

Well-to-do Patricia is the kind of glint-eyed villain who is never happier than when she’s fuming in head-to-toe camel. So when Bridget “messy” Kiely shamed her in a Dynasty-style matriarch-vs-matriarch showdown a couple of weeks back, the audience was already predisposed to be on Bridget’s side.

Oh yes, and there was the fact that scheming Patricia had failed to show any regret for the death of Bridget’s son Darren, killed by the hand of her own son Michael way back in episode one.

I would describe myself as fully involved. Only seven weeks in, and Red Rock is tangling its soap web with a proficiency that must be thrilling bosses at TV3, even if after a first-episode viewership of 323,000 ratings figures promptly halved, resulting in an average “overnight” figure of 199,400 for the first 12 episodes.

Indeed, TV3 says that ratings are ahead of where they expected them to be at this point, and in any case, the figure of 199,400 – like Michael Hennessy in the Garda interview room – doesn’t quite tell the whole story.

The consolidated ratings average, which includes any playback of recorded episodes that takes place within seven days of the broadcast, is significantly higher at 264,000, while the show also draws in viewers via 3Player – being three times as popular as “lost” soap Coronation Street on the catch-up service, according to TV3.

A viewer is a viewer. But soap operas were traditionally scheduled to spark regular viewing habits among a “live” audience at particular times on particular evenings. So it’s interesting when they happen to thrive in a culture where technology makes it so easy for people to watch whatever they want, whenever they want.

And it’s a good sign for the show, as playback and catch-up viewers are engaged ones who make an active decision to watch. The classic soap storytelling tricks are drawing them in.

Long before Red Rock went on air, TV3’s departing director of content Jeff Ford forecast that the ratings for the soap would follow a “J-curve”, starting at a certain point, then dropping as the curious-but-not-convinced tune out, before growing again. This is also known as a “hockey stick” curve.

The first part of his prediction has come to pass, and the second part may be on the cusp of doing so: TV3 says last Thursday’s episode was the most-watched Thursday night for three weeks.

It will take a few more months of one-liners, heart-to-hearts and shouting matches before a trend can be firmly established, but really, there’s no obvious reason why the soap – made for TV3 by two companies with excellent pedigree, Element Pictures and British production house Company Pictures – shouldn’t be a success both throughout and beyond its initial 160-episode, two-year commission. The idea that it might be sold abroad is intriguing.

I like Red Rock – a lot. The characters I have warmed to most so far are two of the gardaí, conflicted young Sharon Cleere (Jane McGrath) and her mentor figure, tough-but-maternal Sgt Angela Tyrell (Andrea Irvine). Like all the best soaps, Red Rock has female characters that are the agents of their own lives, rather than cast as adjunct girlfriends or mothers, and that’s always a relief.

There’s also great value in the assorted comic-relief gardaí, the more emotional interactions between Supt McKay and Claire Hennessy as a couple trying to conceive and the arc that sees the aforementioned Patricia to-and-fro-ing with her café owner lover, Liam Reid (Anthony Brophy).

It took me a few episodes before I recognised Brophy from his role as Spanish ambassador Chapuys in The Tudors and now I keep expecting him to update the sparse population of the Neptune Café on the status of the Lady Mary’s health. For several of the actors, however, Red Rock is their first real television work and it shows – in a good way, as it helps it feel fresh.

But none of the cast would have their gigs without the work of the writers and producers, led by creator and show-runner Peter McKenna and series producer Gareth Philips, who are delivering 80 scripts and almost 30 hours of drama to TV3 a year. Ask anyone who has worked on any proper soap: it takes skill to work that fast and not lose the plot.