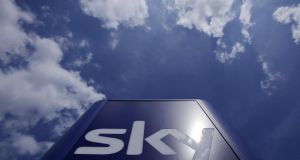 Record demand for entertainment and broadband in Britain, Germany and Austria helped European pay-TV group Sky to post a slightly better-than-expected 18 per cent jump in full-year operating profit on Wednesday.

Sky, which formed from the combination of Britain’s BSkyB, Sky Deutschland and Sky Italia to serve 20 million customers in Europe, said the group had seen its highest organic customer growth for 11 years in Britain and Ireland, and its highest ever customer growth in Germany and Austria.

Its customer base in Italy remained stable after three years of negative growth.

The strong demand meant Sky posted full-year revenue up 5 per cent to an as-expected £11.3 billion (€. 15.96 billion). Combined with cost cuts across the business, that led to operating profit of £1.4 billion, slightly ahead of a consensus of £1.3 billion and up 18 per cent on a year ago.

“The investments we have made have given us a strong platform on which to build and we have a clear set of plans to deliver long-term growth and returns for our shareholders,” chief executive Jeremy Darroch said.

Sky, which is engaged in a fierce battle at home with rivals such as BT and Virgin Media to provide pay-TV, broadband and telephony, said it had been helped across the five countries by improved customer loyalty and demand for an increasing number of services.