Sean O’Rourke, ‘News at One’, Claire Byrne and ‘Drivetime’ among shows adding listeners 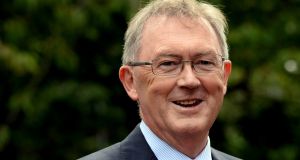 Sean O’Rourke: Audience on Radio 1 is now higher than Pat Kenny’s was in his final full year at the station. Photograph: Cyril Byrne/The Irish Times

Radio 1 added 64,000 listeners over the full year, according to the Joint National Listenership Research (JNLR) survey for January-December 2015.

The final quarter was a positive one for the station, with all of its weekday peak-time programmes attracting more listeners. It is now reaching its highest audience since 2009.

Newstalk’s surge in listenership appears to have eased off for now. Newstalk Breakfast, the Communicorp-owned station’s star performer in recent times, lost ground since the last survey but is still up 6,000 year-on-year, at 171,000.

The figures make much less pretty reading for sister station Today FM, which has continued to lose market share.

Ian Dempsey, its breakfast presenter, added 6,000 listeners in the fourth quarter of 2015 and held steady over the course of the year, with 187,000 listeners. Another bright spot for Today FM was Alison Curtis on Saturday mornings. Curtis saw her audience of 141,000, up 6,000, overtake that of Kenny and Today FM’s Matt Cooper in the list of Ireland’s most popular radio shows.

But elsewhere Today FM struggled, with all of its peak-time weekday shows except the Ian Dempsey Breakfast Show declining.

Mr McGuire said Ray D’Arcy’s afternoon show, which is up 22,000 at 215,000 listeners since he took over the Radio 1 slot, has “really bedded down and settled down”.

He also praised Mary Wilson’s Drivetime for adding 18,000 listeners over the past year. Ms Wilson’s programme is “up against two big beasts in George [Hook] and Matt [Cooper]”, Mr McGuire noted, yet it has extended its lead.

In the list of the most popular radio programmes, News at One climbed into the fourth slot behind Morning Ireland, Marian Finucane’s Saturday programme and Liveline.

The audience for the bulletin, presented by Áine Lawlor and Richard Crowley, is up 34,000 over the full year at 346,000, while there were even higher gains for Saturday with Claire Byrne and Sunday Miscellany.

Head of 2fm Dan Healy said it was “no shock” that the music station, which is aimed at 15- to 34-year-olds, had lost listeners since the latest changes to its schedule, but added he was pleased the profile of its audience was getting younger.

Although Radio 1 commands a 23.1 per cent share of listening nationally and 35 per cent in Dublin, local radio stations dominate in parts of the country, with Highland Radio in Donegal, MWR in the west and Radio Kerry all particularly strong in their licence areas.

In the Cork market, Red FM has continued to make gains at the expense of the UTV Media-owned Cork’s 96FM and C103.

Dublin rock music station Radio Nova said it had now more daily listeners than UTV’s Q102, although Nova’s franchise area is larger than Q102’s as it includes the commuter belt. Q102 has a greater reach in Co Dublin itself, where its market share is 5.5 per cent, ahead of Nova’s 3.8 per cent.

Elsewhere in the Dublin market, Sunshine 106.8 has a 4.3 per cent share, while Communicorp’s 98FM and Spin have 6.2 per cent and 6.9 per cent respectively. But UTV’s FM103 is the second-biggest station in the capital (behind Radio 1) with 10.9 per cent share.

About 16,750 people were interviewed during the 12-month rolling survey by research firm Ipsos MRBI on behalf of radio stations, advertising bodies and the Broadcasting Authority of Ireland.

Based on its findings, some 83 per cent of all adults listen to the radio on a typical day, tuning in for an average of almost four hours.

Younger people are less likely to consume radio, with 77 per cent of the 15- to 34-year-old age group listening daily.

1 How can I view my dead brother’s will if I’m not the executor?
2 Analyst doubles projection for Tesla shares to $1,200
3 Kerry’s Chinese sales set for 30% hit from coronavirus
4 Provisional liquidator appointed to Dublin engineering firm
5 Bursting of Tesla bubble a case of ‘not if, but when’
6 Finance Ireland plans stock market flotation in May
7 Bank of Ireland staff in line for 2.95% pay increase
8 US reiterates opposition to Huawei equipment being used for Irish 5G
9 Flutter’s planned merger with Stars gets informal approval in Australia
10 Number in employment rose 3.5% in final quarter
Real news has value SUBSCRIBE