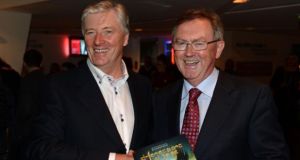 RTÉ Radio 1 is losing listeners across its daytime schedule, the latest snapshot of the radio market shows, while Newstalk continues to make gains and Ryan Tubridy reversed his recent losses on 2FM.

A total of 143,000 listeners have “moved the dial” to Pat Kenny’s show on Newstalk since its launch just over a year ago, according to the Joint National Listenership Research (JNLR) survey for the 12 months to the end of September.

Radio 1 flagship show Morning Ireland, which this week celebrated its 30th anniversary, has lost 9,000 listeners since the last survey and is down 19,000 year on year. It remains the most listened-to radio programme in Ireland, extending its lead over second-placed Liveline, which has an audience of 382,000, down 31,000 year-on-year.

The John Murray Show, Ronan Collins, News at One, Mooney and Drivetime have all lost listeners on the Radio 1 weekday schedule, while the station has also shed listeners from its early weekend morning slots.

As the figures are averaged out over a 12-month period, this is the first survey to give true indication of the listenership of the Pat Kenny Show and rival Today with Seán O’Rourke. Both shows began broadcasting in September 2013, shortly after Kenny defected from RTÉ.

O’Rourke now has 295,000 listeners on Radio 1, down from the audience of 334,000 recorded a year earlier, when most of the figure related to Kenny’s show.

Tom McGuire, head of RTÉ Radio 1, said if had known a year ago that O’Rourke would retain 295,000 listeners out of the total inherited from Kenny, he would have been happy. “The reality is that the vast majority of people are getting their news and current affairs from Radio 1,” he said.

Although there are no plans to make changes to its roster of shows, audience declines will be “taken quite seriously”, he said.

On 2FM, Breakfast Republic shows little sign yet of winning round an audience. The slot now has 100,000 listeners, down 24,000 year-on-year and 11,000 since the previous edition of the survey, which is published quarterly.

However, there was a turnaround in the fortunes of Ryan Tubridy’s mid-morning 2FM show, which added 27,000 listeners since the previous survey and took his total to 171,000. The show, which has just added SuperValu as its first sponsor, has 19,000 more listeners than it did a year earlier. Tubridy described it as “a slow burner”.

Although 2fm made gains in the Dublin market, on a national basis it stayed flat at a share of 6.6 per cent. Head of 2fm Dan Healy said he expected this market share would soon break through 7 per cent as the impact of changes to the 2fm schedule were fully felt.

The new 2fm is “probably a bit more populist”, he said. “We’re still in a battle. The next 6 months, and the next 12 months, are going to be as challenging.”

The station is operated by “a bunch of people who have been working their asses off”, Mr Healy added, and while it is set to make “a small loss” in 2014, it is likely to break even and move to becoming “a net contributor” to RTÉ by the end of 2015.

Newstalk chief executive Gerard Whelan said he was “pretty pleased” with the survey, which showed that Newstalk increased its national market share to 6.3 per cent.

Mr Whelan said he had addressed Newstalk staff and told them that they would “never get a perfect 10”, and if they had, they would have “nothing left to improve on”. Kenny’s show, which has developed “a more relaxed and conversational style”, will continue to expand its audience, he predicted.

Despite the publicity yielded by its poaching of Kenny, the station’s best performer is Newstalk Breakfast, presented by Ivan Yates and Chris Donoghue. The show, which Mr Whelan described as “spiky” and “provocative” now has a listenership of 153,000, up 32,000 year-on-year.

Nationally, Radio 1 remains the most dominant single station with a market share of 22.1 per cent. Communicorp’s Today FM, the second biggest national station with a 9 per cent share, had a mixed survey. Its best-performing shows are both at breakfast time: Ian Dempsey on weekdays and Alison Curtis on Saturdays.

Local or regional stations account for more than half of all radio listening, with this segment of the market making gains at the expense of national stations.

A total of 16,600 people were interviewed during the year-long survey period by the research firm Ipsos MRBI on behalf of radio stations, advertising bodies and the Broadcasting Authority of Ireland.

Some 83 per cent of all adults listen to the radio on a typical day, tuning in for an average of almost four hours.