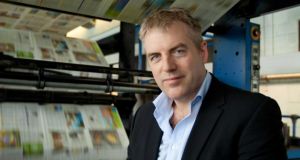 Donal MacIntyre, presenter of Print and Be Damned, the four-part series on the newspaper industry that begins tonight on TV3, describes the programme as “an alternative way of looking at modern history”.

As well as the much-trailed exclusive interview with Peter Murphy, the son of Bishop Eamon Casey, the first episode also features journalist Brenda Power talking about the suicide of poet Pat Tierney shortly after he gave an interview about his intentions to Power and the Sunday Tribune. MacIntyre also talks to Nell McCafferty about the unsolved Kerry babies case she reported on in 1984.

The four-part series was produced by Sideline Factual for TV3 with funding of €205,000 from the Broadcasting Authority of Ireland’s Sound and Vision fund.

MacIntyre, who has worked for number of publications including the now defunct Irish Press and Sunday Tribune, says he was naturally drawn to the idea for the series. “I’m also a kind of outsider, because I’ve worked away from the Irish press too.”

Having won an apology and damages from Kent Police in 2002 following its comments about an episode of the BBC series MacIntyre Undercover, MacIntyre says he found it easy to form a rapport with Louis Walsh, who is interviewed in the second episode about his libel case against the Irish Sun. “It’s only when you have been through the pain of a libel action – and it’s career-threatening – that you understand. So we shared those moments.”

In another episode, Sunday Independent editor Anne Harris describes how the newspaper’s decision to support Fianna Fáil in the 2007 general election came after an accidental meeting with former taoiseach Bertie Ahern at a function for the Irish cricket team. “It was a deal that was bartered, and one wonders if that deal had not been bartered, would Fianna Fáil have won the election?” asks MacIntyre.

He is upbeat about the future of journalism and says there is still cash for investigative reporting, as long as news groups are “dextrous and imaginative” about funding. “I’m very positive about it, and I’m on the front line of it too,” he says. Now working for the Sunday World, he cites the video that the newspaper filmed in Mauritius to accompany his investigation into the murder of Michaela McAreavey. The footage was repackaged and sold to US network CBS Reality this year under the title Donal MacIntyre: Murder in Paradise.

“The sale of unique content internationally is funding our cold cases,” he says.

“Newspapers, technologically, might be on the way out, but Irish journalism will always be there, it will just have a different vehicle."

1 Who are Ireland’s 17 billionaires?
2 Ireland has fifth-largest number of billionaires per capita in the world, says Oxfam
3 Why has the pension age question suddenly become an election issue?
4 Builders finish over 21,000 homes in State during 2019
5 Property firm sues engineering company over waterproofing of basement
6 Boeing’s 737 Max will fly again in 2020, Avolon predicts
7 Report claims liquid natural gas plant not needed in Republic – Wallace
8 Ministers ditch Davos for electorate’s doorsteps
9 Hats off to Philip Treacy as profits rise
10 Help! Will I get a State pension?
Real news has value SUBSCRIBE