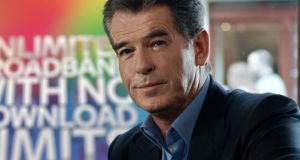 Sky Ireland is spending €10 million on a marketing campaign starring actor Pierce Brosnan to promote its new broadband and home phone services. The pay-TV provider will “roadblock” Irish television stations in the 21.15pm ad break tonight, meaning viewers of all Irish channels will be exposed to the ad featuring the former James Bond.

The Hollywood actor puts in a tongue-in-cheek performance in the 60-second ad, in which he returns home to Ireland and everybody he meets seems to be beaming in his direction, in awe of his celebrity. However, it is soon revealed that what they are really excited about is an advertisement for Sky. The ad is the first of two filmed for the campaign in Dublin city centre and Dalkey last month.

The media company, which entered the Irish broadband market in February, will advertise its new product bundles across television, press, radio, outdoor and digital. The heavy press marketing includes a double-page spread takeover of pages two and three of today’s Irish Independent .

Mark Anderson, director of sales and marketing at Sky Ireland, said demand for its broadband products since they were launched suggested the Irish market was “relatively underserved”.

The television element of the campaign was developed by the London-based ad agency WCRS and was shot by director Taiki Waititi and Oscar and Bafta-nominated cinematographer Danny Cohen.

Mr Brosnan is not the first Hollywood actor to have appeared in ads for Sky broadband - in the British market, both Jennifer Aniston and Bruce Willis have starred in separate campaigns aimed at increasing broadband subscribers.

The company, which is 39 per cent owned by Rupert Murdoch’s News Corporation, is the second-biggest broadband provider in Britain following its acquisition of Telefonica’s broadband and fixed-line phone division last month.