Streaming service now has 117.6m customers worldwide, wrapping up its biggest year ever 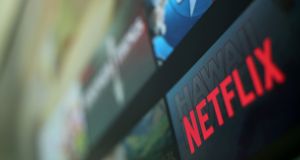 The Netflix logo pictured on a television screen in California. The company said on Monday that it now has 117.6 million customers worldwide. Photograph: REUTERS/Mike Blake

Netflix, the world’s largest online TV network signed up 8.33 million customers in the fourth quarter, surpassing analysts’ estimates of 6.34 million, thanks in large part to the popularity of the fantasy series ’Stranger Things’.

Netflix Inc now has 117.6 million customers worldwide, wrapping up its biggest year ever for new subscribers.

While rival media companies merge, fire staff and fret about the future of their businesses, Netflix keeps chugging along, adding customers at home, in Europe and Latin America. Sales grew by a third to $3.29 billion, the company said on Monday after markets closed, while earnings almost tripled from a year prior.

Netflix will put all of that and more into new TV shows and movies, and has said it will spend as much as $8 billion on programming this year. The company will dramatically increase its non-English programming with anime series and local language productions.

Shares of the California-based company rose 7.2 percent $244 in extended trading. The stock had gained 15 percent this year prior to Monday and its market value at $97 billion was more than four times that of CBS Corp, owner of the most watched US TV network.

International territories accounted for the bulk of the subscriber growth in the most recent quarter and hold the key to Netflix’s future, with additions totalling 6.36 million to beat the 5.05 million average of analysts’ estimates. International operations were profitable on an annual basis for the first time, the company said.

The US business also showed vigour, with the company signing 1.98 million new customers, up from a year ago and beating analysts’ projections of 1.29 million, according to Bloomberg data.

Netflix churns out a wide range of new shows every month to entice new viewers and keep old ones. The company released new seasons of two of its biggest hits, “Stranger Things” and “The Crown,” in the latest quarter. It also released the first season of David Fincher’s “Mindhunter,” a $90 million movie starring Will Smith, and its first original German series, “Dark.”

Netflix predicted it will add 6.35 million customers worldwide in the first quarter of the year, more than the average 5.18 million projection of three analysts. The company said that includes 1.45 million new subscribers in the US.

Net income for the quarter increased to $186 million, or 41 cents a share, Netflix said, in line with analysts’ estimates. Results included a $39 million charge for unreleased content. During the quarter, the company fired Kevin Spacey from “House of Cards” and cancelled a planned movie with the actor after he was accused of sexual misconduct.

The company’s October price increase - $1 a month for the most popular plan - had little impact, if any, on growth in the quarter. While a previous increase slowed subscriber gains, this one passed with less scrutiny or media coverage.

The ability to raise prices could boost Netflix’s profit in the long-term. The company has stayed around break even for most of its existence, but continues to burn through cash because of lavish spending on programming, financed by borrowing.