No slide rule, but plenty of politics in media mergers

Government guidelines designed to protect pluralism have finally been set 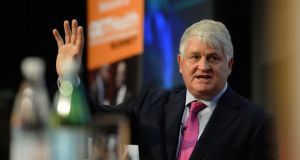 In the frenetic, fast-evolving world of media, nothing appears to move more slowly than the laws and regulations that govern it.

Minister for Communications Alex White, due to present final guidelines for the new media merger regulatory regime to the Cabinet, has carried the reform baton on its latest lap. But this is a stop-start marathon that began with the appointment of an advisory group over seven years ago. Oh how media barons must have been sweating all this time.

White recently let slip that a report on the future of RTÉ and another one on competition in the advertising market prompted “robust discussion” around the Cabinet table. So we can surely expect that the media merger guidelines will have generated the same heated debate and that ministers didn’t simply shrug them off as a long way of saying “don’t worry, when we approve Denis O’Brien’s next acquisition, the decision will be totally above board, with references to the Herfindahl-Hirschman Index and everything”.

The shadow of billionaire privacy campaigner O’Brien looms large over all conversations about media mergers in Ireland. He is the obvious reason that the National Union of Journalists (NUJ) Irish secretary Séamus Dooley used the words “horse”, “door” and “bolted” when a consultation document on the draft guidelines surfaced last December.

In 2012, O’Brien increased his stake in Independent News & Media (INM) to 29.9 per cent. The exit of chief executive Gavin O’Reilly was followed by a boardroom reshuffle, with O’Brien voting against the re-election of some directors.

Months later, the Broadcasting Authority of Ireland said the changes at INM did not oblige it to examine whether O’Brien, owner of the national radio stations Today FM and Newstalk among other assets, held “an undue amount of communications media”. He did not control the media group, it argued. He merely had a “substantial interest” in it.

When the NUJ called White’s draft guidelines “lamentably late” at the end of last year, it was fresh from urging the Minister to intervene in a deal signed by Newstalk to supply news to UTV Media’s six radio stations in the Republic – taking its syndicated news client base to 24 stations. The NUJ wanted the Minister to “cry halt” to what it described as the “latest threat to media diversity”.

Soon after, aspects of the Competition and Consumer Protection Act relating to media mergers came into effect, though the new guidelines – including a “public value test” – had yet to be spelled out.

Good luck to anyone trying to unpick “editorial ethos” and “diversity of content”. But even calculating market shares, “an important indicator of media pluralism”, will not be easy. Yes, there is the Herfindahl-Hirschman Index, a measure used by competition experts to work out the level of concentration in a market. But the market itself must also be defined beyond challenge. Which companies are competing against each other, and how?

Ask the advertising industry: the media is fluctuating faster than it can be accurately tracked. And, in any case, a publication, channel or platform may have a cultural weight that exceeds its share of revenues or share of audience.

Minister for Enterprise Richard Bruton has noted that there can be no “slide rule” for determining how much media is too much media for one person to own or control. While the “relevant criteria” may be better defined than they were before, the ultimate decisions will still, as Bruton admitted, be “judgment calls”.

So far, so political. And, awkwardly, power and influence does not always announce itself via merger and acquisition notices. It can also swell via stock purchases, the exercise of voting rights, unofficial alliances, supply agreements, commercial partnerships and management politicking. This stuff is hard.