Newstalk fires the gun on its general election campaign

The Communicorp radio station is trying to grow its audience . . . but then so is everyone 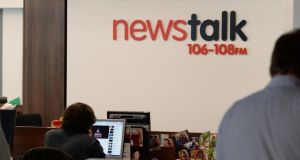 Newstalk denied an advertising campaign had encouraged the use of bad language but had been “a play on words to get across the message that they were determined to get to the bottom of important news stories and be truthful to their listeners”. File photograph: Frank Miller/The Irish Times

The media election has begun and it’s a needy business. Politicians only want enough Xs to get over the line. Media organisations target floating voters, party diehards, small “p” activists and the permanently disillusioned alike. They want their eyes, their ears, their money and their time.

Newstalk, the national station owned by Denis O’Brien’s Communicorp, scampered out of the traps this week with an election-themed advertising campaign, and there were no bullshitters involved.

After last year’s “taking the bullshitters by the horns” poster campaign to promote the work of Ivan Yates and Chris Donoghue, Newstalk got its wrists slapped by the Advertising Standards Authority of Ireland. It deemed the word – “bullshitters”, that is, not “horns” – inappropriate for outdoor advertising, where anyone might see it, including the holidaymakers who, one complainant felt, would be left with a bad impression of Ireland.

Let’s just pause for a moment to think about all the things that might possibly give tourists a bad impression of Ireland and where colourful advertising language might rank among them. Then let’s move on with an acknowledgement that this was a good ad that helped Newstalk further its self-identity as the punchy, snippy, provocative challenger to RTÉ Radio 1.

Newstalk’s new outdoor campaign is stronger still. Most of its ads pose a difficult or sensitive question – the kind that politicians would swim the length of the Shannon to avoid.

“Céad Míle Fáilte?” asks one, accompanied by the image of a child and a baby in desperate, squat-like accommodation. “Who in God’s name should run our schools?” reads one another over an image of a crucifix-adorned schoolroom wall. “Who’ll keep the country working?” asks a third, as young commuters blur along a train platform.

But one ad may be lesser-spotted than the rest. Two owners of out-of-home advertising sites in Ireland, JC Decaux and Clear Channel, have declined to run a poster asking “Time to terminate the 8th?” next to a foetal ultrasound image. Experience has taught them that the subject of abortion leaves their staff at risk of harassment and their property vulnerable to vandalism. Newspaper groups Independent News & Media and The Irish Times have also turned down a press version of the ad.

Newstalk’s editor-in-chief Garrett Harte is sanguine, noting that it is the prerogative of media groups to reject particular ads. Still, it is “disappointing”, he says, and “shows just how divisive this issue can be”.

That was the big point. The wider Newstalk campaign revolves around “issues that we felt listeners want to talk about further”, says Harte. “The debate has become quite simplistic, down to ‘who do you trust with the economy’, which is important, but there are other issues.”

Newstalk’s listenership is younger on average than Radio 1’s. It makes sense for it to emphasise longer-term concerns about society – the “what kind of Ireland is this anyway?” kind of questions: Is it somewhere I would want to raise my child? Is it somewhere that it is even possible to raise a child? Is this a country that respects me and my body and, if not, how can I really engage with any of the rest?

The election is, clearly, an opportunity to recruit new listeners, “but it is not a marketing campaign in the way that giving away 10 holidays is”, says Harte. “You’re not going to see an instant spike in the JNLR [listenership] figures, it’s about winning hearts and minds.”

Not everything has gone its way. Its “Move the Dial” campaign was prompted by its big-money poaching of Pat Kenny, but it is Radio 1 and Seán O’Rourke who have decisively won the mid-morning battle, while the performance of Kenny’s show has underwhelmed.

For a station that likes to position itself away from the establishment – before the 2011 general election, its attacking advertising line was “get the news without the State-run spin” – Newstalk is remarkably old-fashioned in its choice of weekday presenters. Yes, they’re all men.

It will probably still have a decent election – even if it is ultimately outgunned by its older, State-owned rival. Make no mistake: commercial radio is not an easy business. If it was, there would be non-O’Brien groups competing for Newstalk’s licence. Instead, it is on the verge of being renewed without contest.