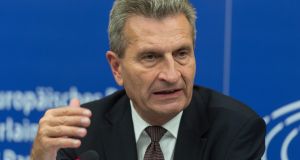 EU commissioner for the digital economy and society Günther Oettinger: “We will have a common set of rules rather than 28 different sets of data protection rules.” Photograph: Patrick Seeger/EPA

New copyright rules unveiled by the European Commission are designed to protect the copyright of news organisations, publishers, authors and others working in creative areas while also ensuring they get paid fairly for their work.

The proposals are contained in a draft copyright directive published by the commission on Wednesday. It aims to update the now 15-year-old directive on copyright in the EU digital single market and to make EU laws fit for purpose in a digital environment.

The directive would, in effect, give to news publishers the degree of copyright protection afforded to authors, performers, the music industry, film-makers and broadcasters in the 2001 directive.

At a press conference on Wednesday, commissioner for digital economy and society Günther Oettinger was asked by reporters to respond to criticism from the United States in relation to “over-regulation” in Europe.

In his state of the union address on Wednesday, commission president Jean-Claude Juncker said: “I want journalists, publishers and authors to be paid fairly for their work, whether it is made in studios or living rooms, whether it is disseminated offline or online, whether it is published via a copying machine or commercially hyperlinked on the web.”

Newspapers, magazines and other press publications had benefited from the shift from print to digital and online services such as social media and news aggregators, the commission said.

“It has led to broader audiences, but it has also affected advertising revenue and made the licensing and enforcement of the rights in these publications increasingly difficult.

“The commission proposes to introduce a new related right for publishers, similar to the right that already exists under EU law for film producers, record (phonogram) producers and other players in the creative industries like broadcasters.”

It said the new right recognised the important role press publishers played “in investing in and creating quality journalistic content, which is essential for citizens’ access to knowledge in our democratic societies”.

“As they will be legally recognised as right holders for the very first time they will be in a better position when they negotiate the use of their content with online services using or enabling access to it, and better able to fight piracy.”

Major online players and content aggregators are likely to offer strong resistance to the proposals.

Google has already attacked the overhaul, saying the measures would force it to vet text, video and images before they can be shared on its YouTube service.

“This would effectively turn the internet into a place where everything uploaded to the web must be cleared by lawyers before it can find an audience,” the search-engine giant said in a blog post. – (Additional reporting: Bloomberg)