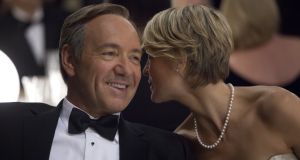 A scene from Netflix success story, House of Cards

Netflix will step up its efforts to block subscribers from watching TV shows and movies not available on the streaming service in their home country, a nod to copyright holders who have long expressed frustration that customers were illegally viewing their intellectual property.

Netflix will stop people from using virtual private network proxies to access the service as if they were in another country, the company said in a blog post. Customers have used VPNs to access Netflix in countries where the streaming service wasn’t available.

Netflix introduced its service to more than 130 new countries last week, extending its reach everywhere but China and three territories where US law forbids the company from operating.

Netflix can offer customers a localised version of the service in all 190 countries, though the variety of programming available can vary depending on its licensing rights in each location.

“In coming weeks, those using proxies and unblockers will only be able to access the service in the country where they currently are,” David Fullagar, vice president of content delivery architecture, said in the post.

“We are confident this change won’t impact members not using proxies.”

While customers who used Netflix may gripe about not being able to watch certain shows, Netflix said the move fits with its long-term strategy to create a uniform content library. Netflix would like to offer the same movies and TV shows in every territory, eliminating the need for people to use VPNs.

It will take years for Netflix to create a universal library because of media companies’ tendency to sell rights piecemeal. Most of Netflix’s content is still produced by other studios.

Analysts estimate original shows and films will account for less than 20 percent of the $5 billion (€4.6bn) Netflix will spend on programming in 2016. “We’re dealing with a system that’s very fragmented,” chief executive Officer Reed Hastings said in an interview last week.

“We have been licensing just for France or just the US. Now we’ve started the movement. It’s probably five to 10 years before the catalogues have really come together.”