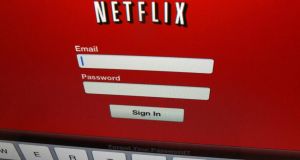 Netflix forecast 2.25 million new domestic subscribers this quarter, according to a statement on its website. Photograph: Mike Blake/Reuters

Shares in video streaming service Netflix have surged after it projected better-than-expected customer growth and said it may charge new users more to share accounts.

The shares rose as much as 18 per cent to $395 in extended US trading last night after the results were announced.

Netflix has been available in Ireland since 2012 and is thought to have around 150,000 subscribers here.

Chief executive Reed Hastings is testing new pricing strategies that would increase revenue and profit, and investing in growth to keep the company ahead of competitors HBO, Amazon. com. and Hulu.

The company may follow the model of a recent price increase in Ireland, where current users were told they would not see price increases for two years, Mr Hastings said.

“Management appears more confident than at any time in their history,” said Michael Pachter, an analyst with Wedbush Securities in Los Angeles.

“It’s either a sign that things are really great or that they’re starting to believe their own hype.”

Netflix forecast 2.25 million new domestic subscribers this quarter, according to a statement on its website.

The Los Gatos, California-based company predicted first-quarter profit of $48 million, or 78 cents a share, compared with analysts’ projections of 75 cents.

Mr Hastings has resisted calls to raise prices by investors who cite the company’s programming obligations, which now stand at $7.3 billion. Instead, Netflix is considering alternatives to its current $7.99-a-month subscription, including an $11.99 option for customers who share their accounts with friends and family.

In December, the company offered some new customers a $6.99 starting plan. “Eventually, we hope to be able to offer new members a selection of three simple options to fit everyone’s taste,” Mr Hastings said.