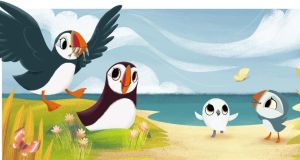 When tiny children are starting to base their entertainment requests on whatever “Netfwix” might be showing you know the game has officially changed for the way we view television.

There is no need to lament the passing of scheduled viewing however, at least not if you’re Kilkenny-based Cartoon Saloon.

The animation company, which is probably best-known for the Oscar-nominated Song of the Sea and The Secret of Kells features, this week received a potentially much more lucrative gong when TV streaming giant Netflix said it was picking up the Irish-based Puffin Rock animated series, which Cartoon Saloon makes along with Derry-based Dog Ears.

Puffin Rock, aimed at pre-schoolers, who may prefer to call it “Puffin Wock”, is based on a family of cute puffins who live on a wild island off the coast of Ireland, like to explore and (surprise) always end up living happily ever after. The lead character is Oona, with the Úna spelling presumably seen as a bridge too far for international audiences who might confuse it with the Spanish or Italian feminine indefinite article.

The rest of the world beckons after that, with Cartoon Saloon soon to be a Netflix old hand, having already seen The Secret of Kells feature on the service.

The company’s Tomm Moore said earlier this year that he received news of the latest Oscar nomination while having lunch at the Kilkenny Castle Park – “I tried to pretend I was calm,” he said at the time.

It may just have become harder to maintain the pretence.