Netflix button to be added to remote controls in Europe 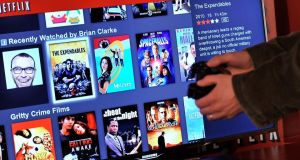 Netflix says the remote control buttons are part of its broader effort to work with consumer electronics manufacturers to build televisions and other devices that improve the experience of internet television. Photograph Gareth Cattermole/Getty Images

Smart TVs, Blu-ray players and set-top boxes will be sold in Europe with a dedicated Netflix button on the remote controls for the first time.

The button, which gives direct access to the Netflix television and movie platform, has been a common feature of remote controls for smart TVs and Blu-ray players in the US for some years.

In a significant boost for the US streaming service, consumers across Europe will from this month find the new branded button on remotes that accompany certain devices from Panasonic, Philips, Sony, Toshiba and Vestel. The remote controls will be included with 2015 and some 2014 product models.

Netflix said the buttons were part of its broader effort to work with consumer electronics manufacturers to build televisions and other devices that improve the experience of internet television. The buttons effectively make it as easy to activate Netflix as it is to change from one traditional television channel to another.

The California-headquartered company, founded by Reed Hastings and Marc Randolph in 1997, now has 57 million customers worldwide. The company does not state a figure for Ireland alone, but it was estimated last year by a third party to have about 340,000 subscribers here, about one in five households.

Netflix spends about $3 billion annually on content and $600 million on marketing, with its most recent high-profile advertising campaigns in Ireland revolving around Breaking Bad spin-off Better Call Saul and another original series, Bloodline.

As an April Fool’s joke yesterday, the company sent subscribers who watched more than two consecutive episodes of a particular show a video message imploring them to “binge responsibly”.

In one of the recorded messages, delivered by Orange is the New Black star Taylor Schilling, subscribers were advised it was “time to get out of Netflix and get back to the world of real human relationships”.